The Best Whipped Cream Ever!

Sometimes the best discoveries are made when you have to use something up before it expires. This was the case with a tub of mascarpone cheese the other day. It was the beginning of yet another long Sunday lunch with the family and my mother-in-law didn't know what she should do with the huge tub of cheese. 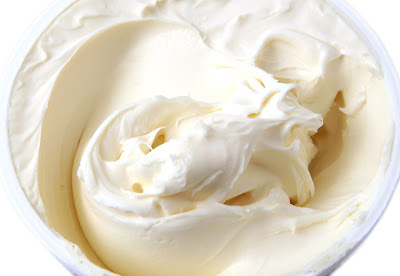 If you are not familiar with mascarpone cheese, it is has the consistency of cream cheese but a mild,  a buttery taste. Mascarpone is the main ingredient in Tiramisù, which gives it the delightfully creamy texture. It is thoroughly versatile in the kitchen as it can be used to make sauces thicker and creamier, it can be used for savoury dips, dessert frosting (I make an orange frosting for spice cake with it), scone recipes and numerous other desserts. It can even be served plain with fruit. It's possibilities are endless.

Mascarpone is produced in the Lombardia region of northern Italy. Italian cuisine is very regional--each product and dish has it's own region and dishes that are made in the south, are not made in the north--and vice verse. So my mother-in-law's lack of knowledge for what to do with mascarpone is a dead giveaway that she is from the south, as they don't use mascarpone in their dishes, they use ricotta. And boy does she know infinite ways to use ricotta!

Anyway, she had a fresh basket of strawberries and there was no cream in the house, so I thought: why not stir up the mascarpone with some sugar and vanilla extract just like whipped cream? With all the numerous uses for mascarpone, I had never thought of substituting it for whipped cream before.

I started by slicing up the strawberries with some sugar, lemon and Cointreau and let them sit. Then I tackled the tub of mascarpone, adding sugar and vanilla extract to taste and stirred. No beaters, no whipping--I just stirred it with a spoon and in less than two minutes, I had thick, creamy and peaked cream. 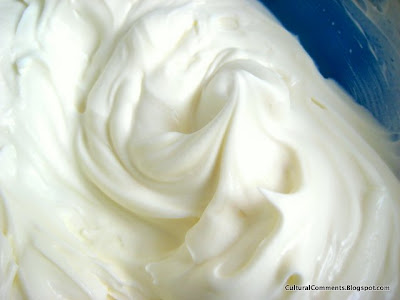 The taste? Just like whipped cream, only a bit denser, richer and slightly more tangy. I actually like it more than traditional whipped cream. But the absolute best part of replacing whipped cream with mascarpone cheese? It's stable and lasts a long time--it doesn't deflate, separate or melt! This enables you to prepare desserts ahead of time. Just think of all the possibilities of dishes made with whipped cream that have to be served immediately. Strawberry shortcake, trifles, decorated cake, etc. 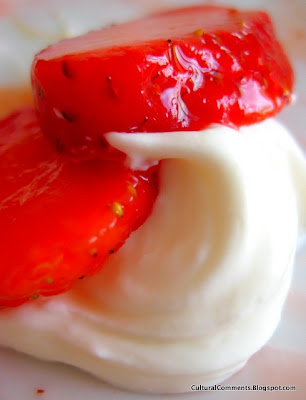 After our lunch, I assembled our strawberries and mascarpone 'whipped cream' and it was absolutely divine! Because the mascarpone is denser, I was able to use it as the bed for the strawberries instead of the other way around. But as I was lost in the ecstasy of my second (and third) helping, I started thinking of other things I could make with this amazing 'whipped cream'. I was sipping on some awfully bitter espresso and I love to add heavy cream to my espresso, so I added a small spoonful of the 'whipped cream' to my tazzina (espresso cup). Mmmmmmmmmm.....thick, creamy, slightly sweet and no longer harsh and bitter. I completely ignored the horrified stares from my in-laws for putting mascarpone in my caffè and continued to let my palate drive my imagination.

The flavours of the vanilla cream and espresso married so well together (tiramisu - duh) that I thought instantly of flavouring the entire bowl of whipped cream with some espresso. I started my experiment...and added about a tablespoon of espresso to a cup of the mascarpone whipped cream and it was fantastic! I decided to make a small 'parfait' by layering the coffee cream with cocoa crispy cereal. 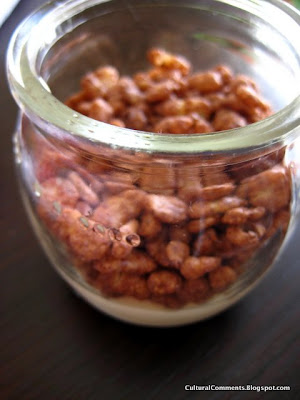 I like to make this with coffee yogurt, but with the smooth, sweet and creamy mascarpone, it was even better! Layer after layer it becomes such a cute little dessert. 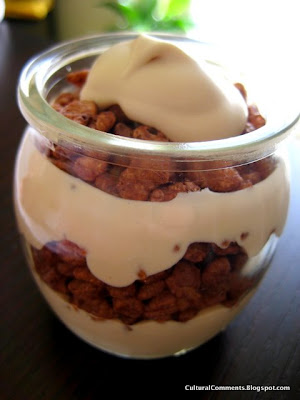 If you haven't discovered all the possibilities of cooking with mascarpone cheese, I encourage you to experiment with it. Buy a large tub and add some to your sauces, make dip with it and of course, whipped cream!

Email ThisBlogThis!Share to TwitterShare to FacebookShare to Pinterest
Labels: A day in the life of..., Food, Homemade, Italy, Recipes, Sunday Lunch, Vegetarian