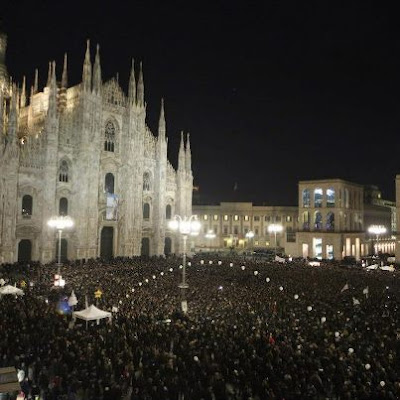 It’s no surprise why the Italian economy is in trouble. Like many of it’s European counterparts, Italy has been subject to credit rating downgrades, hyperinflation with the switch to the euro, excessively high unemployment rates, soaring public debt and a slew of austerity laws in the works to really put the squeeze on the people. Where Italy differs from the others, however, is the gross economic inequality between the working class and the ruling class.

Italians have the lowest salaries of Europe. The average salary for an Italian is 1,000 euros a month (if they’re lucky enough to have a job), from which they pay 22% percent sales tax; rent or mortgage and property tax; annual trash tax; Italian television tax (RAI); the highest rates on electricity, gas and petrol than any other European state and to top it all off, about 36-42% income tax. Could you pay all that and live on 12,000 euros a year?

In sharp contrast, the Italian parliament members make some of the highest salaries in Europe, ranging from 6,000-16,000 euros a month. With the addition of allowances and credits, their pay scheme is an enigma that a specially formed committee couldn't even figure out. Not to mention the end of term pay-outs they receive which can range from 30,000-83,000 euros in one fat check (this gets repeated with each term they complete). This is compounded by the fact that parliament is made of 315 senators and 630 deputy ministers. Let’s do a little math: 945 members of parliament x (I’ll just average) 11,000 euros salary = 10,395,000 euros drained each month from the pockets of the people (for more information on parliamentary salaries, click here). A funny side-note: I multiplied this by 13 for the annual cost, but my calculator gave me an error message that the amount was too large to display! But they contend that they work hard and deserve every penny...