Weekend in the French Alps 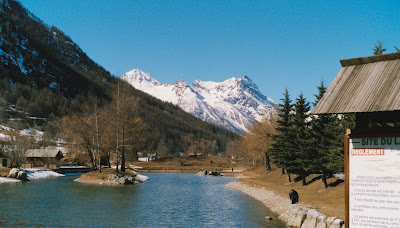 While studying abroad in France, I wrote of our weekend trip to Serre Chevalier: 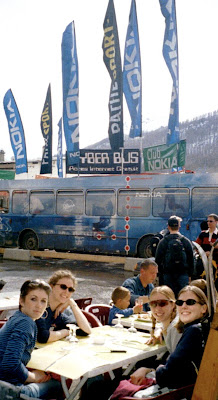 On Saturday morning my alarm went off at 4:06 am and I was up and ready to go right away. That was the first surprising part of this trip. I was so wide-awake! My roommate, Cassie, on the other hand, is NOT a morning person. I was trying to contain myself around her because the night before she was saying that if anyone was chipper, she’d shoot them. But it was so exciting for me--I actually had energy! I think you all know that that rarely happens to me. I decided that I need to wake up at 4 am more often!!! Well, maybe not, but the thought did cross my mind.

Anyway, we walked to the bus station in the dark for a four-hour ride. When we arrived we dropped our bags off at out hostel and walked down to the ski rental place. After we all got fitted for our boards and skis, Jenny, Meryl, Kristy, Krista and I walked into town for lunch. We sat at a café right across from a snowboarding tournament. There was a huge tent for the NOKIA Snowboarding Tour. It was a big deal--and there were a lot of adorable snowboarders--it was nice. Oh--did I mention it was like 70 degrees? Yeah, we were soaking up the rays over huge, yummy salads. Sorry--on with the story. 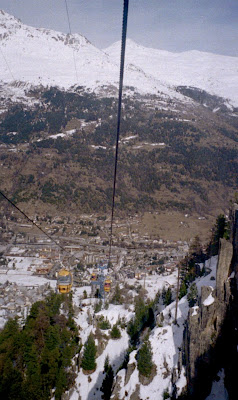 After lunch, we walked back up to our slope and hopped onto the bright yellow ski lift. We couldn't believe how high up we were getting! Then there were jagged rocky cliffs beneath us. Of course, what question is always asked at times like this? That’s right-- "If we fell, we would die, right?" The answer was a definite yes. I think I still have some marks in my arms from my friend Jenny frantically clutching onto me when our cart would go through the guide wheels and make everything shake.


So after our ten-minute trek into the upper atmosphere, we step out into the most beautiful scene--bright white slopes and a hot, intense sun. And just like an oasis in a hot desert, we see a packed café and creperie with hundreds of tables in the sun. Jenny and I made a beeline to it and grabbed a table. Our view was amazing. The sky was bright blue, the slopes pure white, and every color you could possibly image walking around. Europeans wear some really colorful ski outfits! It’s pretty funny. A sign out front said we were 2100 meters up. The hot chocolate was amazing. Jenny and I spent the remainder of the day in this spot, sunning ourselves like lizards to stay warm. It was great. 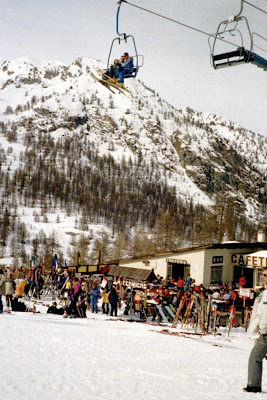 We caught the last ride down the mountain and we were over the shock of the first ride, so the second time was really cool. It was beautiful and we could barely see the village where we were staying. It was unbelievable. We all had dinner at our hostel and then figured out our rooming situation--8 to 10 people per room. I got a top bunk! Our room was great because we had our own shower, but the heater wasn’t working. That room was sooo cold! You can’t loose heat at night in the Alps! So this typical French guy (black and white striped shirt and all) came to fix it and also brought us a space heater. Thankfully because we could have died during night without it!


Sunday was very similar to Saturday--except this time Jenny and I were all ready for a day sunbathing. We got to the café by 11:00 so we had some prime ray time. I was planning on getting a little snowboarding in that morning, because after all, I had been carrying around the damn board everywhere. I finally pried myself from our table and got my board. It was really slippery and when I lifted my right foot to click in, I fell over. I looked over at Jenny sitting in the sun with her cocoa, and then I looked at the long line of bundled up people in line for the lift--can you guess what I decided to do? I was back at that table so fast! We ate a little lunch after we were joined by some of our group, and I ordered a lemon crepe. 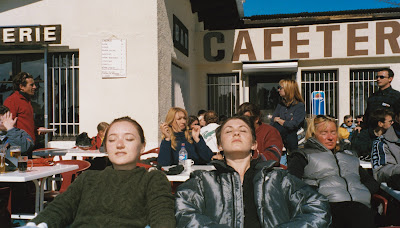 At 1:00 we had to leave to take our sleigh ride! Jenny and I were so excited. On our way down the mountain we were saying how well the weekend was going. Everything was great, the weather was beautiful and we got tan! Then, our gondola started to slowdown, and then it came to a complete stop! Might I mention that we just crested the steepest point of the ride? The part with all the jagged cliffs below--yeah, that was fun. I was fine, I just kept telling myself that it was a normal thing and we’d get going in a few seconds. But after a few minutes of dangling several thousand feet in the air, and Jenny absolutely freaking out (she is a little high strung) , I started to get a little scared. We were stuck for about five minutes, but then we started moving and getting on the ground never felt so good. 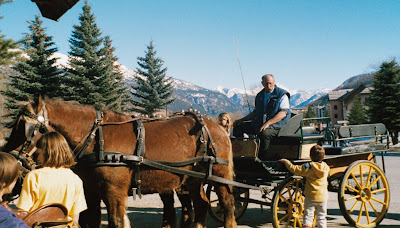 We met up for our "Romantic Sleigh ride" at 2:00, but it turned out that it wasn’t really a sleigh--it was more of a ghetto cart. The driver was about 70 and there were these little girls bouncing all over the place. I looked at this tiny cart with ripped seats and I thought: "You have got to be kidding me." Then I thought that maybe that took us to the sleigh because after all, we were in the middle of a parking lot. But no, that was our "sleigh" and it was a tight squeeze for the five of us. I made sure I sat on the outside so I could get some good pictures. Then the little girls decided that they were going to come too! So they squished themselves up against Jenny and I. So much for taking pictures! We took off on our adventure through the city streets. Yes, the city streets--where the cars drive. Keep in mind that a horse and buggy only goes about 5 miles an hour, and there was no getting around us. There were angry people--and they were honking. Jenny and I were really pissed that we got scammed into this "romantic sleigh ride through the woods". She kept saying that we should just get off and go back to the café. But there was no way I was going to turn back--we were on that thing and we were going to see some beautiful scenery!!!


Fortunately, the little girls were only getting a ride home, so they didn’t stay long. The ride got a lot better after we had room to breath. But we were still going through town with our ugly, old horses with pink bows and bells. And then, everything started to look really familiar-"Oh God! it’s the Nokia tour!" Jenny and I were trying to hide. All these adorable guys started laughing and pointing at us-it was so embarrassing! But then we got over it and the next group of guys that were laughing at us, we started laughing too, and we motioned for them to catch up and hop on! That way they would look more stupid than us because they were trying to run after us in ski boots! It was really hilarious. Just when we were getting used to trotting through town, he takes us on the highway! Yes folks, that’s right--the highway. Luckily there wasn’t anyone coming at that point, so we didn’t realize we were on the freeway. But I did recognize the road from our bus ride. Just as I asked Jenny: "are we on the freeway?" a car came up behind us and had to slam on their brakes to keep from killing us! That answered my question. If we were embarrassed before, we now had a line of cars behind us and they weren’t happy. Yeah, there was more honking. When they would get a chance to pass us, they would rev their engine and gas it around us. Jenny and I were waving to people and apologizing for causing a hold up. Car after car zoomed by and we were still there, trotting along the side of the highway. 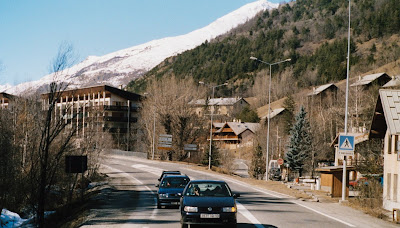 Wouldn’t you know, a huge Land Rover comes up behind us and the driver looks really familiar--it was the guy who fixed our heater! Great! We were turning the other way so he wouldn’t recognize us--embarrassing. Finally we got to a little village and had some scenic views. But we knew that the inevitable was coming--we had to go back the way we came. We had to merge back into traffic and the driver started yelling at the horses "Allez, allez!" (Go!,Go!). Like a scene out of Clueless when Dion accidentally gets on the 405 and everyone freaks out because they almost die--that was us. A big tour bus was just going too fast, and our driver quickly changed to "Arretez! Arretez!" (Stop! Stop!). We had to wait until the next break. People drive really fast in this country, and on we go with a horse and buggy! That was a little scarier than dangling in the gondola for 5 minutes. So, we were repeating the same thing when, low and behold, a Land Rover pulls up behind us, and it’s the same heater guy! Go figure.

When our ride was over, Jenny and I couldn’t stop laughing. The whole trip was so hilarious! It was worth it just for our laughter. We didn’t get our "romantic sleigh ride through the most beautiful parts of the Alps," but we still had a good time. On our way back to the Hostel I stopped for some home made candy and a dark chocolate crepe. It was yummy. Then we left to go back to Aix at 5:00. We got stuck in traffic, so our bus ride was more like six hours. But we played the card came Uno, and we even taught two French guys how to play. That was pretty funny. It was a good weekend.
No comments: