My First Experience with Italian Hospitality

This is an old story I sent out while studying abroad in France. And it's the first glimpse into my morph from a Francophile to an Italiana... 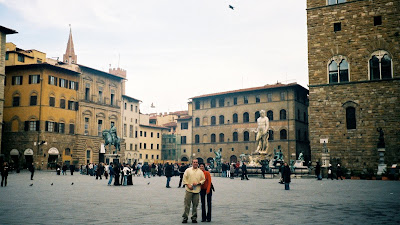 Last week, I had a week long break from school. My friends Jenny, Jason, Leslie and I planned to go to Italy. Jenny's friend, Kara, is studying in Florence, so we could stay at her place for free. We were very excited.

Anyway, we left for Nice on Friday night because we had an early morning flight to Florence on Saturday.  A classmate of Jenny’s recommended a hotel in Nice to stay in, as it was pretty good, cheap and in a great location. We thought, "Cool, this is working out great!" So we get to this "great" hotel and it’s a little disheartening. We still had pretty high hopes as we entered the small lobby, but things were about to change. We asked to see the room before we committed to it, of course, but that didn’t really change anything. As we walked up the rickety stairs to the first floor, we were immediately transported into a B movie with a bad script. Picture the grossest sleazy motel on Sunset Blvd., where they have hourly rates for the prostitutes. Now you have an idea of our hotel. The floor of the landing/ hallway was so repugnant; I don’t think I could quite describe it. What was left of the carpet was so stained it looked like those old big brown seventies patterns--but it wasn’t--they were stains. There was a heavily dilapidated couch that you couldn’t pay me to sit on. I can’t even imagine the things that have taken place on that thing.

By this time, the "eeuuws" and the "Oh My Gods" were free flowing, and a number of other expletives about the conditions that I won’t mention. So, we find our room, and we all look at each other with desperate faces before opening the door in front of us, as if a surging cesspool of rot and dank lie just beyond the door. But, when we opened it, it wasn’t as bad as we were assuming it to be.  There were two queen-sized beds, the wallpaper was peeling off the walls, and the carpet was almost black. I had a sudden urge to check the room for used needles, crack pipes, and dead hookers. But none to be found--fortunately. We checked the bathroom after comments of "there’s no way I’m showering in this place", but none of us could shower because there wasn’t one! Now, you’re probably wondering whether or not we stayed in the place, right? Well, my opinion was that it was only for one night, we had really heavy bags, and the only important things were a) a clean toilet, b) a lock on the door and c) clean sheets. If the sheets appeared in the least bit to be unwashed, we were out of there. I checked the sheets and they were crisp, clean and white. Therefore, I was willing to stay for one night. We took a vote, and decided to stay.

Anyway, on with the trip to Italy…when we got on our plane, we were almost the only people there, so the flight attendant chilled with us for the whole flight, telling us everything we were flying over, giving us magazines, extra croissants, and so on. I felt like a pig after that flight because I had breakfast at the airport just before out flight, I had a plain croissant with tea in the beginning of the flight, and then, I of course couldn’t refuse the chocolate croissant that he offered me later on. But it was really good, so I didn’t feel that bad. Before we landed, he slipped Leslie a bag filled with goodies like mixed nuts, chocolate covered almonds (that’s a Provencal specialty here--they look like olives because of it’s green candy shell, but the taste amazing), and a bottle of Irish whiskey for all of us. Nice guy. 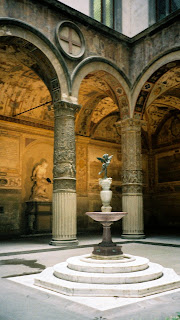 Florence was great; we had a lot of fun. Jenny and I couldn’t get over how great the shopping was. But I think the best part was how warm and friendly everyone was. And I also loved hearing the language. French is a beautiful language, but Italian sounds so fun and lively and enjoyable! Every restaurant we went to we got pictures with the waiters, and it was such a great time.  We stayed in Florence from Saturday to Tuesday. On Sunday and Tuesday nights, we made dinner at Kara’s place. The first night we went to the market, and made bruschetta and linguine with fresh garlic, olive oil and tomatoes, finished off with some Italian red wine. On Tuesday night, Kara made eggplant parmiggiano, pasta, bruschetta and I made sautéed zucchini with garlic and tomatoes. It was so delicious and easy. Yummy. 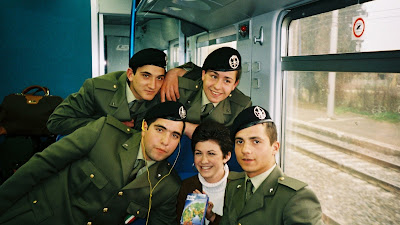 On Wednesday, we took a train to Rome, where we were visited by about 20 Italian soldiers in our car. We were kind of annoyed because we were all really tired and they wouldn’t leave. But it was pretty funny because none of them spoke any English. There is a picture of Jenny sitting with the four main guys that were talking to us. Leslie has a friend in Rome who picked us up from the train station and arranged everything for us with our hotel. We had a slight problem with our arrival in Rome because the workers at the Termini station were on strike. So we had to get off at a different stop. Poor Alessandro had to drive back and forth between the two stations about four times because he kept being told different things, plus the fact that our train was about 2 hours late. But everything worked out, and he took us right to our hotel. Alessandro is currently working in one of the best hotels in Rome and is training to become a sommalier. We had a most unbelievable experience in Rome thanks to him because we didn’t have to worry about anything and we were taken to fabulous restaurants for dinner. Plus the added excitement of seeing Rome in a car! Roman drivers are officially insane. We almost died about….um...well I lost count. But we had a great time. By day, sightseeing and touristy stuff (and shopping as Jenny and I discovered its even cheaper in Rome) and by night, fabulous restaurants with great company.

Friday afternoon we took the train back to Florence and had our last dinner out at our favorite restaurant. We had to say goodbye to Alfredo! We had a great time and they told us that the next time we come to Florence, they would be in a different restaurant, they gave us directions and told us to go there instead.  They were sweeties, and the food was great. Saturday morning we left Florence (regrettably) to return to France. Aahh, Italy--I miss it so much already.
No comments: