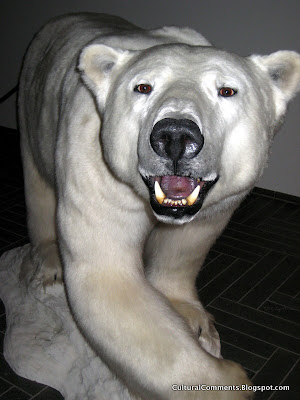 Norwegians have a thing for Polar bears--especially northern Norwegians. I was recently going through some picture albums and came across a few pics I snapped of some of the MANY stuffed polar bears that are scattered all around the small city of Tromsø. (If you've never heard of Tromsø, check out my mini-video: Live From Tromsø, Norway!) Polar bears are not only a part of their history, but also part of their identity and pride.

Tromsø is known for many things, including the land of the midnight sun, having the northern-most university in Europe, called "the Paris of the north" (I completely disagree with that one), the most joked about by locals is being a city where polar bears roam the streets. While this was true a very long time ago, it has of course become old lore. It is still true for some of the northern-most islands of Norway, and I have actually met a few people from islands where polar bear sightings are common (and they're very proud of this). But the only polar bears you'll see in Tromsø are stuffed. 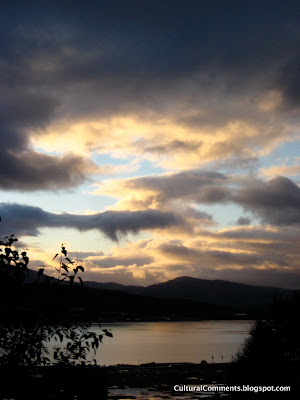 Before coming to Norway, when I thought of the most beautiful sunsets I have seen, I would think of three or four that stuck in memory. But now, being amazed by breathtaking sunsets and generally amazing skies (even at night) is so common to me that I have lost count.
During a recent conversation with a Tromsø local, I was discussing how incredible it was to have such amazing sunsets as a normal, common occurrence. To my amazement, it was explained to me that these are not just common, but predictable by season. Apparently, during the late summer months, when the sunsets start happening again, they paint the sky with bright pinks and magenta. Fall brings warm, golden sunsets like fire and the winter brings pale pastel pinks as a soft backdrop to the bright white snow. And it is true! I have been in Norway from August to the end of November and I certainly have seen the sunsets change with the season. When I first arrived, the sun was not setting until around 3am--which was really more of a twilight than a full on sunset.
Continue Reading
No comments: