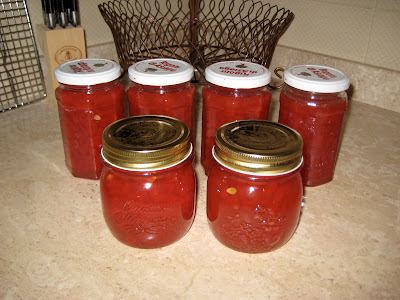 In Sicily, summertime brings with it so many wonderful things. Hot weather, cool beaches, fresh gelato, vacation time and the biggest anguria (watermelon) you have ever seen. Now, those super huge melons are something we don’t often see anymore, as the smaller hybrids are what we usually see these days. Genetic modification with zucca (squash) plants, which makes a much smaller, more manageable sized melon has now pretty much overtaken the market. And really, how many one to two person households can consume a 15 pound melon anyway? Unfortunately, that cross breeding has annihilated the original, sweet flavor of watermelon. Do you ever buy a beautiful watermelon and think to yourself, this just doesn’t taste like it did when I was a kid? Well, that’s why.
Continue Reading
No comments: 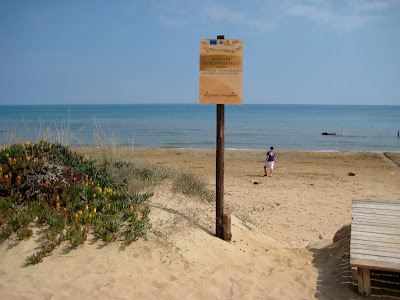 Today I am writing from the shores of the Mediterranean sea. That's right, I'm at the beach and I can officially announce the start of the Summer season. It has been a pretty chilly year so far and it has left the locals slightly confused. Normally, by the time July rolls around, everyone here is sporting a nice shade of molasses on their skin. But this year, it just hasn't been hot up until the last couple days. And even now it's thankfully not as hot as it usually is. Although this chilling affect made my winter a total nightmare, I am now loving it. We are half-way through summer and we haven't been awakened at five in the morning gasping for air and covered in a layer of sweat. We still get awakened at five, but it's from the neighbor's relentless  rooster! But my husband, Leo and I have been plotting it's demise...stay tuned for that one. 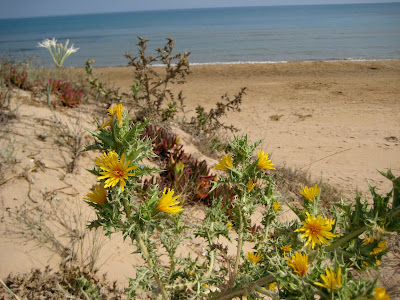 Anyway, back to the beach. Leo and I like to come to this fairly remote spot just outside the city. It's nice and calm and the shore has a long shelf, knee deep for at least 50 feet.  It is also a little more wild and natural than the other beaches and the only trash is what the sea spits out. The other beaches in the city are always packed with people, cars, noise and trash. Trash is a hugely terrible problem here. Well, I think it's hugely terrible. Others don't seem to mind going to a beach filled with plastic bottles, broken shards of glass, plastic bags and mounds of cigarette butts. Sure, they notice and they complain about it, but they are also the ones making the trash. It's yet another Sicilian dichotomy.
When people here go to the beach, they set up shop for the whole day, bringing picnic tables and chairs, big umbrellas and tons of food. The beach staple is pasta al forno, or baked pasta, in a huge pan to feed twice as many people as they have. Then there are secondary dishes like shrimp, salad, watermelon and then all the chips and sweets for the kids. Can you imagine how much trash that generates? They bring everything but the kitchen sink and it's a wonder how they fit it all. Sometimes when we see people unloading their car, we wonder if they'll start pulling couches and TVs out of their little sub-compact cars! 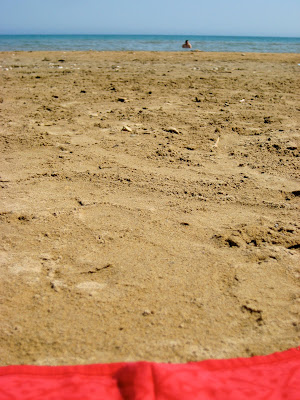 The two of us, however, prefer simplicity. A quiet spot, a couple of sarongs, a little cooler bag with some water and a good book (or journal in this case). When we first came to the beach together, years ago, we would take long walks with a garbage bag and clean up as much trash as we could. But now, we don't have to deal with it--we have to drive 25 minutes to get here, but it's so worth it.
Today is a fantastic day--a bright hot sun, a constant cool breeze and the sound of the sea gently lapping on the shore.
Che meraviglia.

How To Preserve Capers 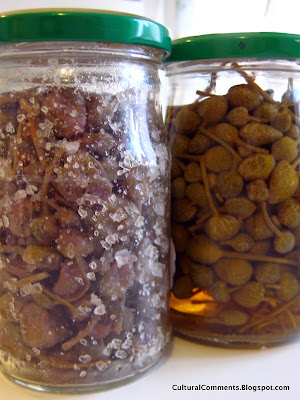 This may have been the most fun thing I made during my time in Sicily. Not just because it was so simple, but because it included an adventure! Scouring the countryside for cappero bushes was an experience I will not easily forget. We searched for them down small roads and along stone walls. They were slightly elusive, growing in dry fields, among clumps of fan palms and other similarly shaped bushes. But it was the delicate, creamy blossoms that would give them away. For a detailed account of my caper adventure, see Wild Capers!

So after you gather your capperi, you need to wash them thoroughly. If you have enough, you can sort them according to size. The small, baby sized capers are what we are accustomed to getting at the store. But capers can get rather large as they get closer to blooming. Italians like these larger ones for salads. I was picking all the cute little buds that I was familiar with and my husband was picking the large buds that he preferred. Then there are the caper “berries”, which I had not known about previously. These are the seed pods that form after the flower blooms. They look a little like mini torpedoes, but they have a slightly different taste than the buds do.

Now, there are two ways of preserving capers. They can be preserved dry in salt, which is very common in Sicily, or they can be pickled with vinegar. I have done both, but I prefer them pickled. 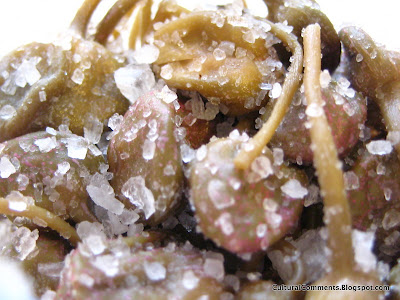 To make capperi sotto sale, or preserved in salt, you must first butare l’acqua, or get the water out. Put your washed capers in a colander or strainer resting on a bowl and toss them with a generous amount of salt. Using a large grain salt works the best if you can find it. Leave the capers like this for two days, adding additional salt as needed, as much of it will drip out with the caper water. This is the time that your whole house will fill with the aroma of capers. After about two days of releasing their water and they seem a little shriveled, it is recommended that you leave them in the sun for a bit to dry out. Then you put a layer of salt on the bottom of a jar, layer the capers and continue to alternate layers of salt and capers until you get to the top. There is no boiling needed, as the salt does all the preserving for you. You can’t get more antique than that. Close the lid tightly and you can keep them for quite a while--maybe even forever. Store them in a cool, dark place for at least a month, and then you can start eating them. When using capperi sotto sale, take the amount you need and rinse them under cold water before using. If they still seem too salty, soak them in water for a few minutes. 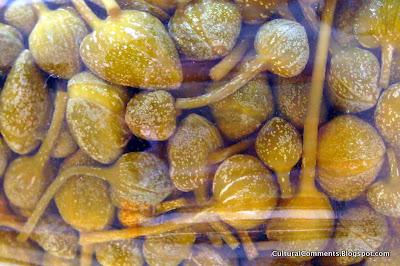 Capperi sott’aceto, or pickeled capers, are much quicker and easier to make. Pack your fresh, washed capers into sterile jars. Bring a small pan of white wine vinegar to boil (measure enough vinegar to fill your jar) with a bit of salt and an optional bay leaf. If your vinegar is really acrid, you can add a pinch or two of sugar to cut the acidity. Pour the boiling vinegar over the capers, filling to the rim, close the lid tightly, and your done! Turn the jar upside down for twenty minutes to get a good seal and store in a cool dark place for about two months before using. Personally, I couldn’t wait that long and I tried mine after two weeks. They were so delicious!