Vernazza: A Sigh of Relief 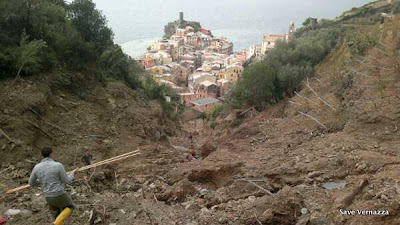 The sun came out from behind the rain clouds today, giving many a big sigh of relief. It has been a nerve-wracking weekend in the 5 Terre, as it has been surrounded by unbelievable torrential rains causing flash floods in several surrounding cities. Miraculously, the massive storms seemed to curve around the 5 Terre, sparing Monterosso and Vernazza from heavy downpour. Such great news! There was one or two days of steady rain, but nothing out of the ordinary and nothing that caused further damage. Whew! I know a lot of people have been breathing sighs of relief--I certainly have. 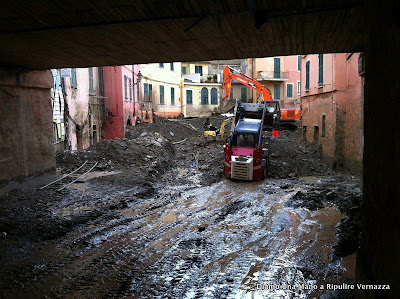 Vernazza has been nearly empty due to a precautionary evacuation. There was concern about the canal still being blocked with debris and the rest of the "live" landslides slipping further down the hill. Only a few dozen people remained to keep watch, including emergency workers like fire fighters, forestry specialists and police; about 40 volunteers and the mayor. 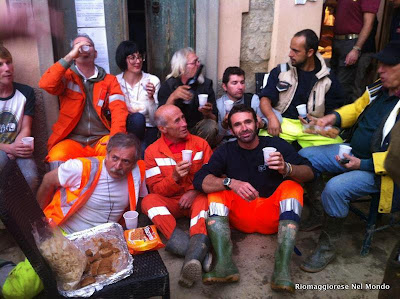 These amazing people continued to work, rain or shine. But the weather reports of severe storms kept tensions high. On Sunday, the stress was just too much for Vernazza's mayor and he was airlifted to the hospital in La Spezia after falling ill. The town rallied together in support and he was quickly sending text messages from his hospital bed that he was okay, not wanting anyone to worry or make a big deal about him and that he was just wanting to get back to his town. He is now doing fine and will be back at work tomorrow. 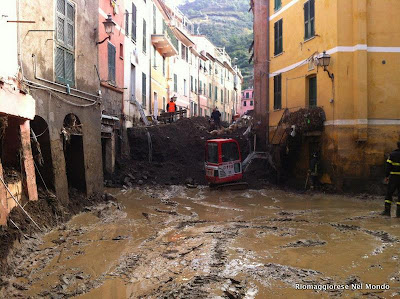 Today, with clear skies and even a little sunshine, they were able to work out a three-step debris removal plan for the rest of the week. They have a crew set-up near the piazza for debris removal, a crew working on via Roma (the main street) for digging out the businesses and another crew working on the upper level of town and the canal. Many more shops have been liberated from depths of dirt and the train is now making regular passages again. This is all good news, which makes us all happy! 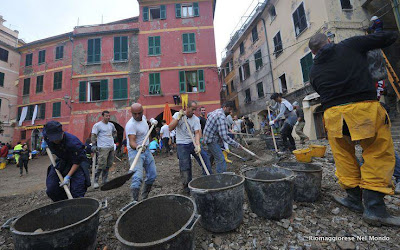 The local chatter is all about when they can get back to their homes and when they can pick up their shovels to dig out their town. Their spirit remains high and their voglia, or want, to get back to work is almost irrepressible. Wednesday the residents will be allowed to return during the day, but are not allowed to stay the night. All residents must leave by 5:30 pm, in a sort of enforced curfew, until the officials have deemed the area and the buildings safe and secure.

In more tragic news, the long search for the three missing persons (one elderly woman and two older men), may have come to an end. Throughout last week, three bodies washed up on the shores along the French Riviera. Thusday, Nov. 3,  a man's body was found in Cap Taillat; Friday, Nov. 5, another man's body was discovered on the shore of Bormes Les Mimosas; and Saturday, Nov. 5, a elderly woman's body was discovered again in Cap Taillat. It is still not clear if these are the missing Vernazzans, due to the difficulty in identification. But, it does seem like the likely result, and hopefully they will be returned to their families soon, so they may rest in peace.

Remember, if you haven't donated, now is great time to do so! Click for donation information:  Donations to Save Vernazza