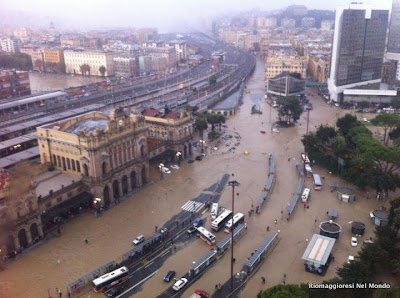 The latest update on the terrible storm hitting the coast of Liguria again is shocking. The amount of rain dumping down on Genova is drawing comments from locals that they have never seen rain like this before and many are asking: "What have done to deserve this?"

To ad insult to injury, some of the people left without homes or evacuated from last weeks storm are staying in Genova! Poverini!

Again, I am not in Italy right now, so I am GLUED to the BBC in the hopes of seeing some news reports on what is happening in Italy and THERE HAS STILL BEEN ZERO COVERAGE! In fact, I just saw a quick weather report discussing the "heavy storms hitting southern France causing a risk of flooding and POSSIBLY threatening some flooding in northern Italy." POSSIBLY? Here is a video just uploaded to YouTube after HOURS of rainfall caused destructive flooding in the city:


Maybe the BBC has not heard of a website called "YouTube"? I don't want to sound crass, but this is getting ridiculous! Their story now, as I write this, is about going live to Los Angeles for news about Michael Jackson's doctor. REALLY???  Now breaking news--uh, finally...to hear these words is like music to my ears and I know they will finally talk about Italy...


"A report just in that a truck driver in Kenya has been shot".

Ok, now I'm angry! Why is it so difficult to get coverage in Italy? I have been emailing the BBC and their "Have your Say" show, begging them to cover this story, but still nothing. SHAME ON YOU, BBC! 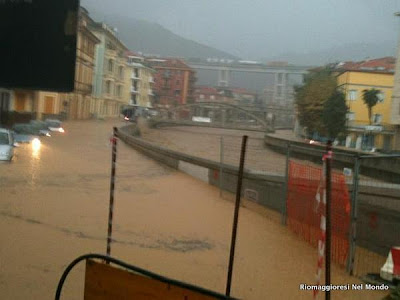 There are already 6 dead in Genova, two of which are children; 1 dead and 4 people still missing and presumed dead in the 5 Terre and estimates of more than 9 deaths throughout the Lunigiana. They have reporters on call in Kenya, but NO ONE in Italy? This is a tragedy that is going unreported. Blogs and online forums should not be the main source of world news--thank goodness we are all here to spread the word, but I find something terribly wrong with this!

Now, more than ever, it is important to make any donations to the Italian Red Cross, as they service the entire flood region. You can donate by credit card and PayPal directly on their website:
http://cri.it/flex/FixedPages/IT/Donazioni.php/L/EN


-Select “Emergency Tuscany and Liguria” for the preferred fund and if you are outside of Italy, leave the State option blank. If in the US, choose "Stati Uniti" for your country.

If you live in Italy, you can donate 2 euros by sending a text message to the number 45500 from your cell.

At least there is a bit of good news out of Vernazza, as the storm has stayed west of the 5 Terre and has not rained very much in the area. Our global positive thinking and praying has worked! Let's keep it up and continue to visualize and pray for clear, dry skies...but for all if Liguria this time!