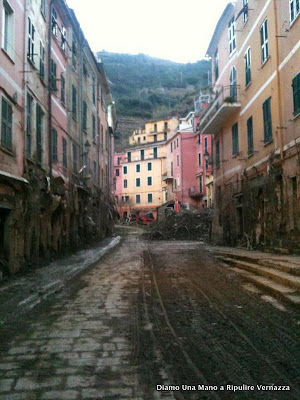 I am happy to report that a week of mostly dry weather has afforded much progress in Vernazza! Last week, a schedule was set forth to clear via Roma (the main street) from the piazza to the train bridge by Saturday, and they have accomplished it as planned! Also, many homes have been reconnected to running water and workers plan to have the sewers fully functioning by Monday 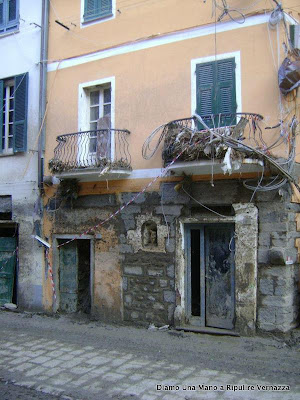 Many businesses have been excavated from the debris in an impressive earth moving achievement. Look, you can see the road! But how did they do it? 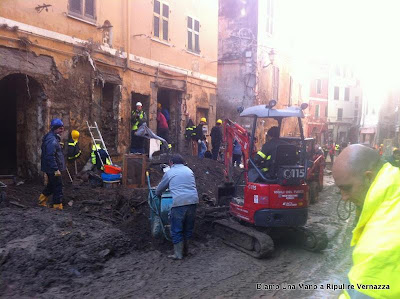 With LOTS of work! Emergency workers have arrived from all over Italy to lend a helping hand, which attests to Italians' fraternity and solidarity. In a country where governmental organization is not on the top of any list, I am extremely impressed by the coordination of so many services coming immediately to the rescue of this small village. 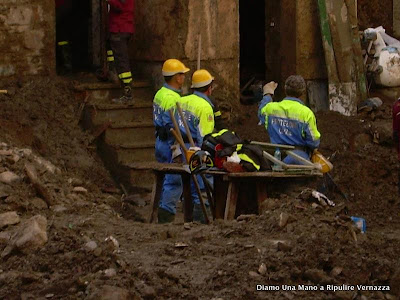 From the top of Italy to the tip of the boot, groups rallied together to lend their helping hands. The picture above shows emergency workers who came from Friuli, near Venice. In Calabria, the people behind the Facebook page called “I [heart] Calabria” have posted to all their followers to donate 2 Euros by text message to help their “Ligurian brothers.” There have also been benefit dinners set up from Asti to Rome. But even though they have accomplished so much, there is still so much more to do. 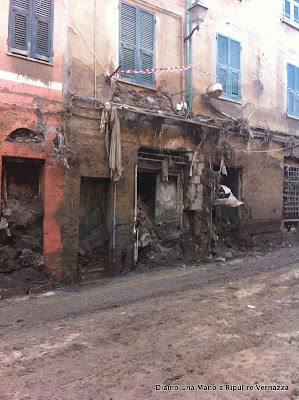 Digging out these shops to see the light of day only shows how much more work has yet to be done.


I have to admit that during this ordeal, as tragic as it has been, it has rekindled a flame inside me that I had long since forgotten. My last few years in Italy has left me more than a little disillusioned with my dream of living here. The day to day struggles, the economic crisis, and the general discontent and malaise of a people disgusted by their government, demoralized by an unemployment rate in excess of 30% for my age group coupled with back-breaking taxes--not to mention the embarrassment of their leader—have all played a part in extinguishing my spark of joy. The sparkling beauty that inspired my dream of moving to Italy and motivated me to sell everything I owned and set off for a new life, had become completely tarnished. Battling inefficient bureaucracy, not finding employment for over two years and subsequently falling into financial hardship had caused me to be very critical of Italy and Italians.

There is a limit to how many CVs one can send and online applications one can fill out before it all seems hopeless. I wondered how I even thought it possible to find work if there are hundreds of Italians applying for the same positions—why would they choose me over a native born Italian? By August, I was done—that’s it, no more. I considered moving anywhere for work: France, England, Norway and even back to the US—anywhere but Italy. But on October 25, disaster struck the Cinque Terre, this sudden crisis took precedence over everything else. Especially wallowing in my disillusionment. 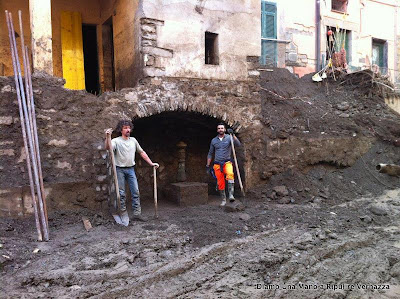 During the past several weeks, I have seen people pull together in the most amazing and heart-warming way. Not only from the emergency crews tirelessly working around the clock in cold mud, but also from the volunteers gathering at the ports early each morning for boats to take them to the disaster zones. Above all else, what has moved me the most are the people of Vernazza and Monterosso. In the face of destruction, loss, shock and tragedy—some experiencing devastating scenes, so traumatic I could not imagine how they could recover—they united, persevered, supported each other and carried on with confidence, vigor and even high spirits.

This is what I fell in love with! This is what fed my soul and gave me the first feeling of really being at home as I sat alone in a quiet square in Vernazza so many years ago. Italians are amazing people and when the chips are down and times are tough, they shine through more than anyone else. So I thank them again for all they do and the limitless capacity of their hearts. For rekindling that flame inside me and reminding me that I am so proud to be living in this beautiful country.

Links:
For the original story of what happened, see: Disaster Strikes Vernazza
For information on how to donate, see: Donations to Save Vernazza
If you have travel plans to the 5 Terre, see: Notice to 5 Terre Travelers