We all need to get validated in life, but this post is about getting a different kind of validation--train ticket validation! 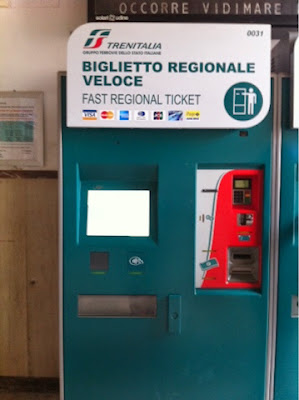 When you travel in Italy, you will inevitably take a train, ESPECIALLY if you plan to visit Liguria. Purchasing your ticket can be done in many ways, whether online on Trenitalia's website, at the service window in any train station or at the many convenient Biglietto Veloce ticket machines. Please note, these machines only sell tickets, they do not validate them.

Unfortunately, buying your ticket is not the only step required in a stress-free and fine-free train ride. 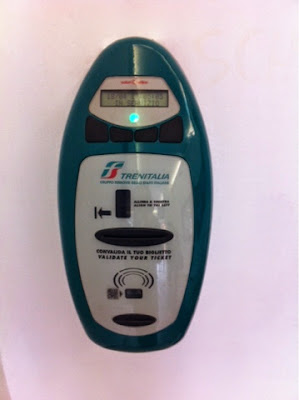 You MUST validate your ticket at any of the small green and white time-stamp machines located near the train platforms.

On my trip to La Spezia yesterday, I was sitting next to a group of Spanish tourists. When the conductor came around to check tickets, they confidentilly showed him their tickets, which they had just purchased at the train station in Vernazza. He quickly shook his head and announced that their tickets had not been validated and an unvalidated ticket is the same as having no ticket. Ouch. He continued to explain that the fine for not validating the ticket is €50 per ticket! They were in 4--quadruple ouch!

I couldn't believe my ears as I sat across the narrow aisle, nearly shoulder to shoulder with the now horrified tourists. One of the women spoke Italian perfectly and explained to him that it can't be possible to fine them for something they didn't even know about. That she had just purchased the tickets and no one told her anything about stamping them. The conductor proceeded to run off an (clearly well used) explanation that he hears all kinds of excuses and he can't pick and choose who is telling the truth or not, and the rules are the rules (so says the Italian!)... He then turned to check my ticket so he could show them the stamp and hole that validation gives the ticket--as if that would change their situation. 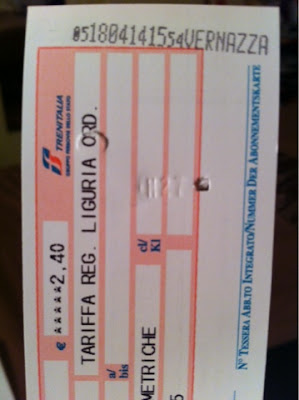 I was starting to feel hot as my blood pressure increased. I find it completely outrageous to charge people such a steep fine for something they don't even know about and, most importantly, is not marked anywhere! Not to mention the fact that they PURCHASED tickets for the train they were on--they weren't trying to sneak a free ride. The woman was right to tell him that it's one thing if you're from here and you know the rules, but if you don't know you can't be punished with such a steep fine. This is, of course, part of the "new Italy" that is cracking down with a heavy hand on any rule infringement and charging exaggerated fines. Sure, €50 may not seem to be the end of the world, but why fine people such a high amount when they were assuming to be following the rules? The answer is simple--to squeeze as much money out the people as they can. It's a current fad in Italy. 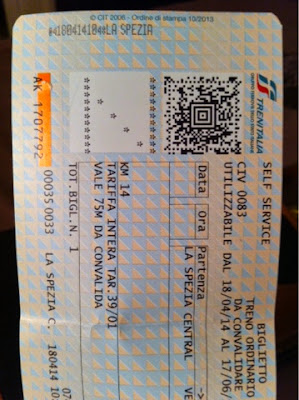 After much discussion back and forth, it was clear that the conductor even felt it excessive to charge them €50 each and told them about a little known clause in the big rule book. I didn't even know this, so listen up--it could wind of saving you €45! If you have your ticket, but are running late for the train and don't have time to validate it (or the nearest machine is broken-which is more likely the case), you only have to pay a €5 fine, as long as you announce the situation to the conductor immediately upon seeing him. So after explaining this, he generously allowed them to use this 'loop-hole' and pay a €20 fine in total. Meno male! As we were exiting the train, I told the woman that it was terrible that they were almost fined €200 for not validating their purchased tickets, but I said that in the end it finished well. She was very nice, but pointed out that they shouldn't have had to pay even €20 for tickets they purchased if they don't clearly tell you the rules. I have to say, I completely agree.

So if you have plans to travel Italy by train, don't forget to stick your ticket into the little machine and get validated!!

Email ThisBlogThis!Share to TwitterShare to FacebookShare to Pinterest
Labels: A day in the life of..., Cinque Terre, Italy, My Laments, Tourism, Travel