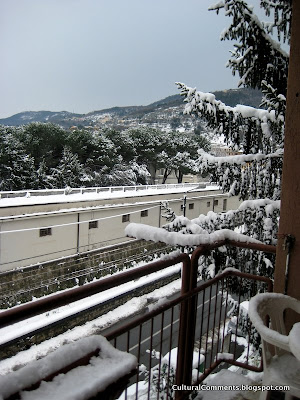 The Siberian winds have been blowing and all of Europe has been suffering under frigid temperatures and blankets of snow. But while the northern countries are equipped to handle meters of snow and below zero temperatures, Italy is not. It started last week and here in Liguria, we all awoke on February 1st to brisk air and white roads! It is certainly a surprise and a novelty to see snow where you rarely get it. By lunchtime, the sun came out and people were excited to go out and play in the snow, make some snowballs and be fascinated by the crunching sound beneath their feet. 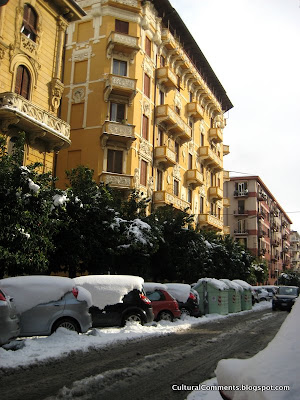 Even the Cinque Terre awoke to white mountains 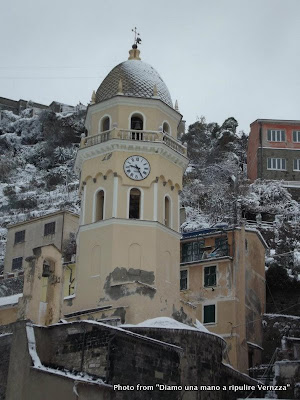 and patches of white snow on the colored facades. 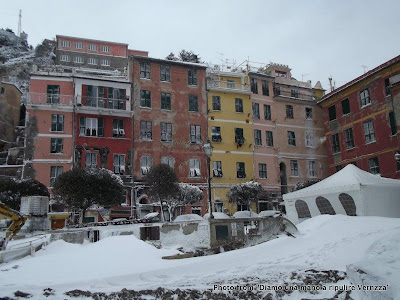 So many were delighted at the beautiful sight of snow in Vernazza. Even in Rome, with it's traffic and transportation lines brought to a halt, the people happily strolled the streets to enjoy the views of their monuments covered in snow. But each day, the temperature kept dropping and when the air outside becomes too cold to bear, the novelty wears off quickly. 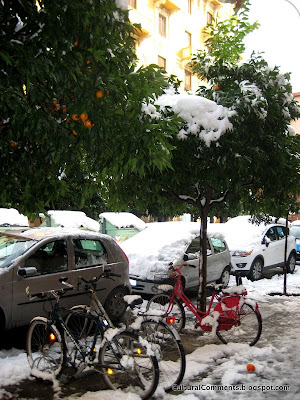 It is especially difficult in places that don't usually get very cold (like here) because only a small percentage of homes actually have central heating--ours certainly doesn't. And thanks to the gas lines being replaced in Vernazza, the few people staying strong and bearing the cold are only left with electric space heaters. 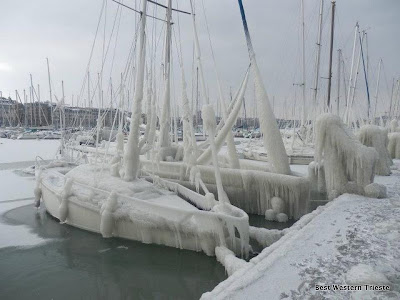 This cold spell has been quite awful. In Italy alone we have had almost 10 deaths so far from people freezing and we are still on alert for more freezing temperatures. As you can see above, the ice has paralyzed the port in Trieste and even the Grand Canal in Venice has frozen over (I'm sure there must be some joke about that--like Venice's version of hell freezing over)! This unbelievable Siberian cold front has caused below zero temperatures all over Europe and even in Northern Africa and Turkey. Istanbul, Maghreb and even Morocco received unprecedented snowfall. 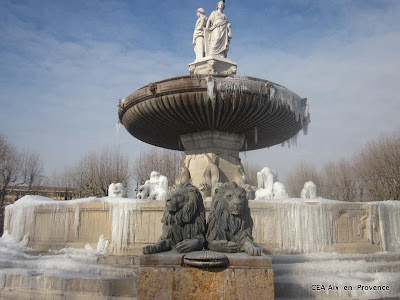 Not too far from here, in Aix-en-Provence, France (where I studied years ago) was hit with some of the coldest temperatures on record. The above photo was taken by my program director who, in her thirty years in Aix, has never seen the famous La Rotonde fountain freeze like this.

This weather is too strange and I'm not quite sure what to make if it. If anyone wants to argue about whether climate change is a real issue or not, this should certainly give proof that things are all out of whack! For now, we have had a brief break with slightly warmer temps, but it won't last long--Friday more snow is predicted here in Liguria with temperatures dropping below zero again. I just hope it is over sooner than later.

Email ThisBlogThis!Share to TwitterShare to FacebookShare to Pinterest
Labels: A day in the life of..., Homemade, Italy, Travel