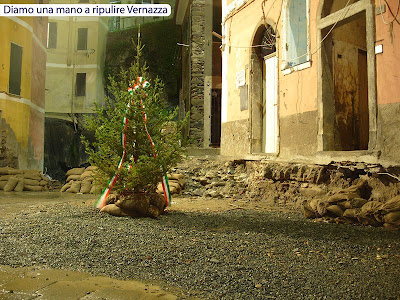 Well, Christmas is just around the corner and it has been a very busy December in Vernazza. Not only have the workers continued their excavations of the canal and the upper road into Vernazza, but Vernazza itself has been busy with meetings, interviews and project planning. We have also had a fair share of emotional ups and downs, frights and celebrations. 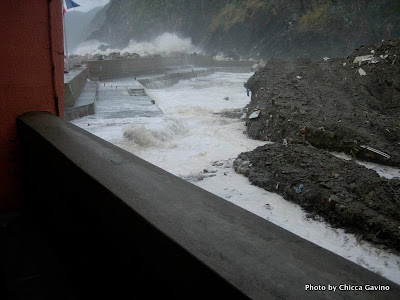 The beginning of December brought the first of the winter storms, and the first festa or town party. December 5th gave a little taste of the power of the seas with mareggiata, or high, rough seas that crash against the rocks in a violent display of nature’s power. Fortunately, it did not cause any damage and everything calmed down for the Festa dell’Immacolata on the 8th.

Beautiful weather welcomed the townspeople back to Vernazza (some for the first time since the evacuation) for comradery, livelihood and carne asada! 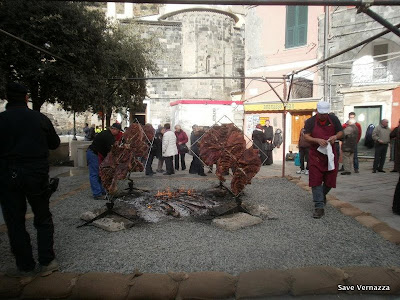 Racks of local meat were roasted over an open fire in the square with friends and family finally back together chatting and kids running around playing. The comments about the day were how nice it was to finally see children back in the village (if only for the day), one of the many sights and sounds missing since the tragic flood. 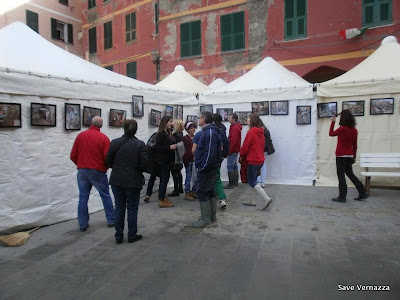 The day was a great opportunity for the locals to be back together again. Many residents have been dispersed to other nearby towns and cities like Levanto and La Spezia, so some people hadn’t seen their neighbors for over a month. Among those present were the American ladies who founded Save Vernazza, the non-profit organization collecting donations by credit card and Paypal for direct use on rebuilding projects for Vernazza. If you ever hesitated in donating, now you have faces to the name. Click here to donate to Save Vernazza. Just the day before, CBS News from the United States came to Vernazza to do a report and interviewed some of the townspeople and the ladies of Save Vernazza. Here they are interviewing  Mayor Resasco. CBS' story is set to air Thursday, December 22. Stay tuned for that if you are in the US!

December 10th brought a new celebration to Vernazza; a wedding! Not letting the destruction of their town get them down or cancel their union, they marched right down via Roma in wedded bliss. Auguri! 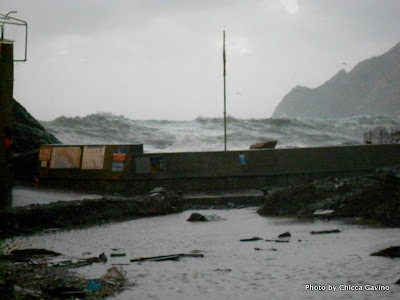 Just one week later, December 17th was one of the scariest days of the month. Ominous skies and violent gusts of wind stirred up quite rough seas. Although the heavy rain did not last long, the storm caused some of the worst mareggiata, or sea storms in a long time. It caused damage to the retaining wall in the sea and the pier and also clogged up the canal that the workers have been working so hard to clear. 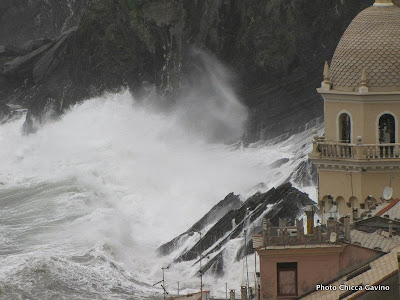 I used to enjoy storms—especially the kind of storms we get here. But now, after all the damage in Liguria, storms only bring nervous tension and held breath. Now when we hear violent gusts of wind, the incessant sound of pouring rain or the shattering sound of thunder cracking through the sky, my husband and I look at each other wide-eyed, filled with apprehension and concern. Not for what might happen to us, but for what might happen to Vernazza. 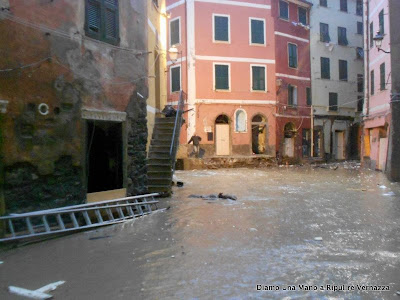 This crazy sea storm caused minor flooding in many towns along the coast, not only inundating coastal towns with sea water, but also spewing out tremendous amounts of debris--debris that was once on land about two months ago. Monterosso and Vernazza experienced minor flooding as well. But since this flooding came from the sea--not the sky--there was no threat of landslides. Although water in Vernazza reached well up via Roma, as you can see above, there was no serious damage.

For the most part, however, we have had unusually fantastic weather for this time of year. That has allowed for uninterrupted work on clearing the canal and the upper part of town. Progress with clean-up has been incredible, although the road in/out of Vernazza is still a complete disaster. 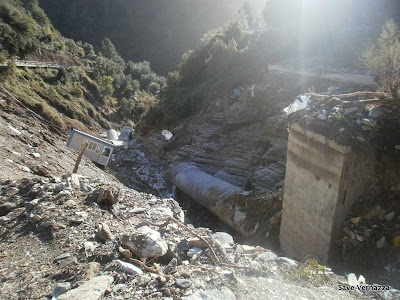 Getting the canal cleared has been the main focus for the last month, not only because of the safety issue for rain run-off, but also because rebuilding cannot begin until the canal is cleared. Lots of meetings and hearings have been held, and some of the best news is that construction can begin by the middle of January. Building permits will be doled out slowly at first, as too many trucks and tractors just can't fit in this tiny village. But just being able to start rebuilding is immensely important. 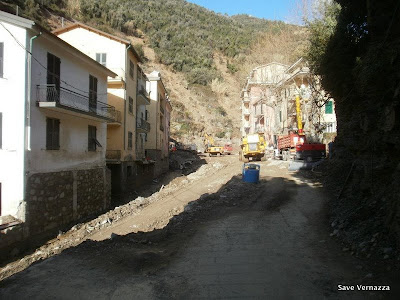 Great progress has been made in Monterosso as well and you can read much about their progress on Kate Little's blog, LittleParadiso and also RebuildMonterosso. 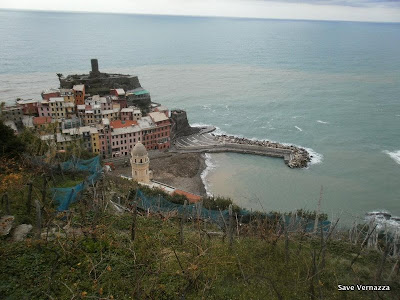 Other good news is that the Parco delle 5 Terre has vowed to reopen all the hiking trails by Easter of 2012, making it in time for the end of Spring travelers and ahead of the Summer season. That will be quite a feat for them because there was already a major section of the trail closed, between Manarola and Corniglia, due to landslides the previous year. I hope they are able to meet this goal. 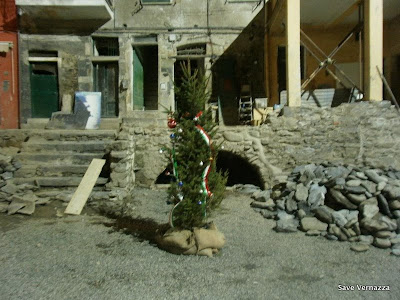 Through all of this: being away from home, parted from friends and family and getting the kids to new schools, the people have been positive and determined. The other night they had live music in the square and this weekend there are festivities planned for the holidays. In an earlier post I wrote of hoping they could get a Christmas tree up and they have done that and more! They now have multiple trees up and even some festive lighting as well. There may not be any doors, but there are Christmas lights. 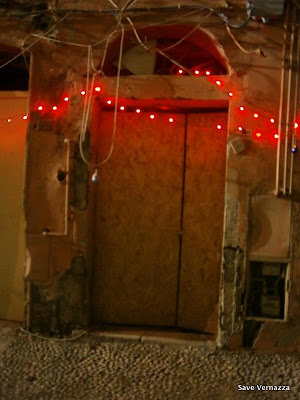 Friday there will be a Christmas party for the children and I hear Santa may be stopping by. On the 24th there will be a big Christmas feast in the square for the residents. Everyone agrees that it doesn't feel like Christmas this year, but they are keeping their spirits high and celebrating anyway.
Buon Natale a tutti!!