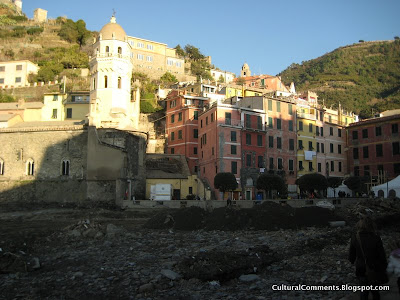 Christmas celebrations will last the next few days in Vernazza, but today's celebrations were started on a sad note. The morning of the 23rd, Vernazza was finally able to put to rest the three victims of the flood, Pina, Giuseppe and Sauro. It was a long ordeal of bureaucratic nightmares trying to get their bodies released from France. In fact, the funeral was supposed to be several days prior, but last minute paperwork kept delaying their release back to their families. In the end, the funeral was held the same day as the Christmas party for the children. 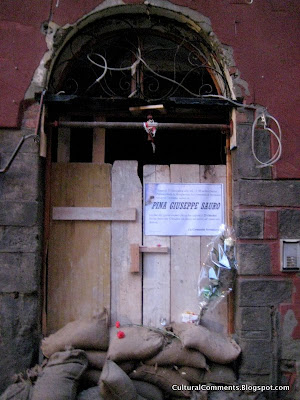 It was a somber event, but it also gave closure to the families' and the entire village's open wounds. One cannot even imagine the pain of not being able to put to rest your loved one due to paperwork--something so absurd. But the community came together to say the goodbyes they never had a chance to say and they lay to rest the three souls taken by the violent flood waters. The funeral ended with a town procession up to the cemetery at the top of the hill. By the afternoon, the town was ready for the children's party. My husband and I came on the train with the group of volunteers dressed as clowns with bright hair, bright clothes and even big red noses. The few children on the train with us were mesmerized and excited as they watched these seemingly normal people change into full on clown gear. 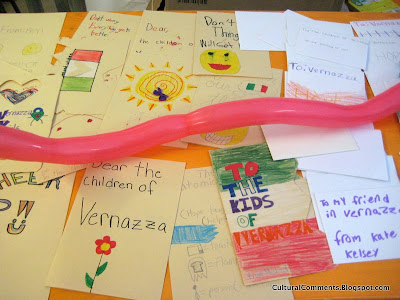 The big tent in the piazza was transformed into a kid's paradise with table for face paint, balloon animals, snacks, candy, hot chocolate and even a table filled with cards from a school in Texas. Their cards contained little drawings and words of support for their long-distance Italian buddies. 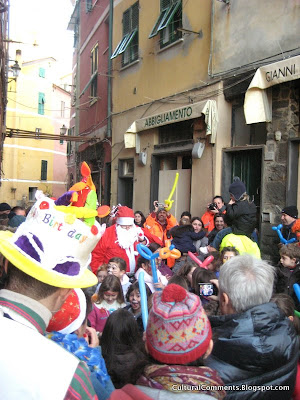 But the real excitement came when Santa arrived! All the kids were ushered out of the tent to see who the special guest was! 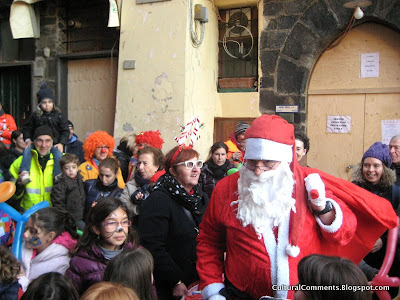 Excited whispers of "Babo Natale" came from lips of kids, filled with anticipation for what Santa brings...presents!! 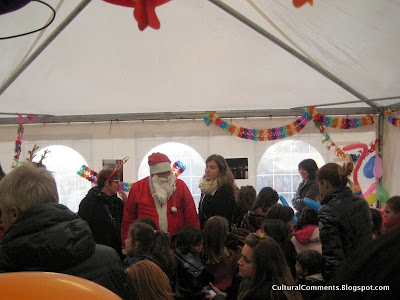 Back inside the tent, after a gracious speech from Vernazza's beloved mayor, it was time to dole out the presents, giving two huge gifts per child, answering the letters to Santa that the kids wrote a few days earlier. 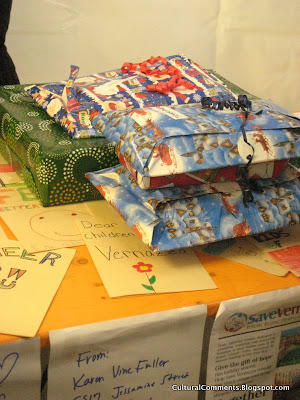 It was great to see the joy and excitement on the children's faces. But for those who had just buried their loved one, I can't imagine how surreal it must have been. But no matter how they felt, they were really good sports about it, laughing and enjoying the time with their kids and happy to see them happy. 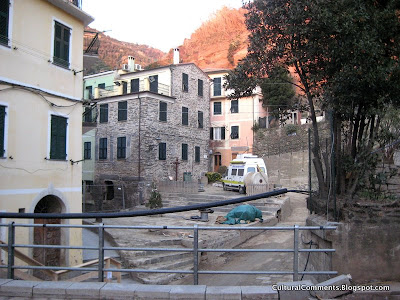 My husband and I broke away for a bit to take a walk through the quiet village. For me, it was my first time back in Vernazza since the floods. The access has been quite strict for anyone without a resident pass, so without a party open to the public like today, it has been very difficult to return. I have been talking about how much I wanted to return and planned it for weeks. But before coming, as we climbed the stairs to the train station in La Spezia, my husband asked me if I brought tissues for when I finally see Vernazza. I was suddenly hit with terrible dread and apprehension. I got nervous about going, nervous about how I would react. I realized that although I have lived and breathed the tragedy while reporting it to the world and poured over every photo from the flooding to the clean-up, I hadn't actually stepped foot in Vernazza and seen it with my own eyes. How would I react to see my special "pearl" of the Cinque Terre and the place where I met my husband reduced by such destruction? 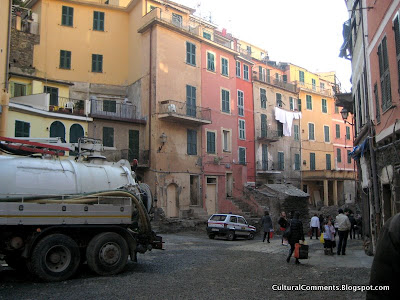 I was expecting to see a war zone and as our train slowly pulled into the station, my stomach was anxious as the sliver of light in the tunnel finally became a full view. And then I felt relieved. To see the streets clean, the walls washed and laundry hanging from the windows was so reassuring. Yes, the town was eerily quiet and half deserted, but the amount of work that had been done in two months was nothing short of miraculous. 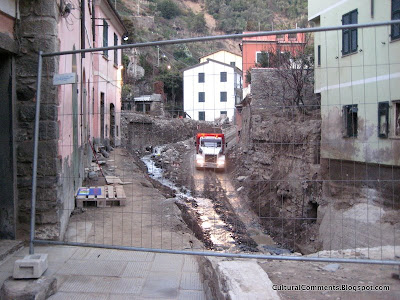 And the work was still going on! On December 23rd, while Santa was busy doling out gifts to the children, workers were still digging out the upper road and clearing the canal. 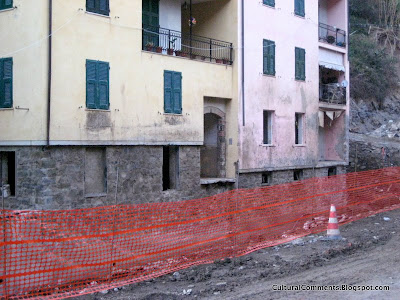 This upper area continues to be the worst off, with these homes still inaccessible. Each one of these buildings had their own little bridge that traversed the canal and until the work is finished and huge trucks no longer need to pass, there will be no new bridges for access. 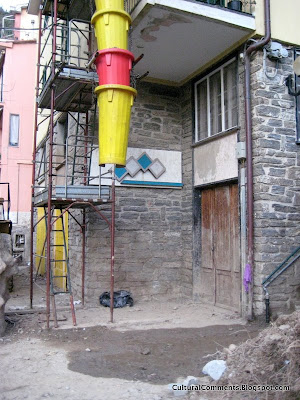 But the other side of the canal is doing great. Thousands and thousands of cubic meters of dirt has been trucked away and a new makeshift road has been created. This is the bank where several people were trapped during the flood. Notice the letters on the sign have been completely torn away. 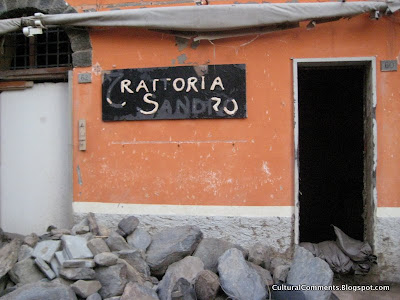 Unfortunately, that is a common sight throughout town. The force of the landslide tore off most of the letters on most of the signs, like this one. Here, the restaurant where my husband worked, so many years ago and the very doorway where we were 'reunited' when I decided to remain in the Cinque Terre. 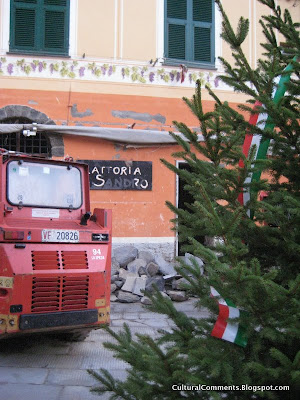 I have seen requests for information on what happened to Trattoria da Sandro. Alessandro was in the kitchen with his son when the floods hit and they were able to narrowly escape to the stairway across the road. Although the restaurant is completely ruined, Alessandro, Argentina and their son are doing just fine. 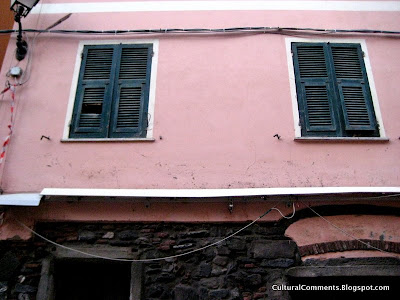 It was so strange to walk the empty road, a road that once was a constant sea of people. We came to my husband's old apartment. The window with the broken shutter was the window I used to spend hours peering down at the road below. I loved watching the people, guessing what their nationality was by a quick deduction of their clothes, facial expression and mannerisms. Now it seems like a lifetime ago. 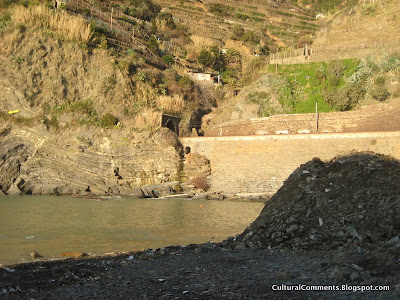 At this point, I think the most shocking change to Vernazza is the beach. The whole village shows the signs of destruction, but you can still make out the same forms and lines as before. The beach, however is permanently changed. 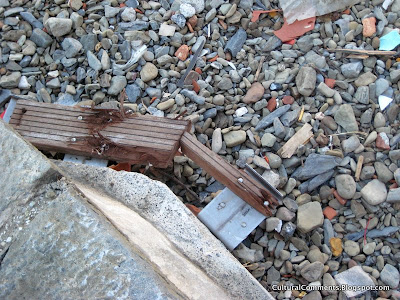 This used to be a view down into crystal clear blue water and these benches once helped you into the little rocking boats. Now it is completely filled with debris. The once tiny, sandy Vernazza beach has become a mess of rocks, brick, tiles and roots. But this, too, I'm sure will be cleaned out as we get closer to the Spring season.