The process of making old-fashioned pomodori secchi (sun-dried tomatoes) is actually incredibly easy. So easy, in fact, that you really don’t have to do much of anything. And yet, the mere mention of these shriveled little things seem to excite the senses and conjure up visions of Italian lunches overlooking the rolling hills of Tuscany.  So how can something so simple to make only be known to us from jars imported from far away lands?

In Sicily however, you don't need your own garden to get amazing tomatoes. Here, they are just sold on the side of the street, in wooden crates. 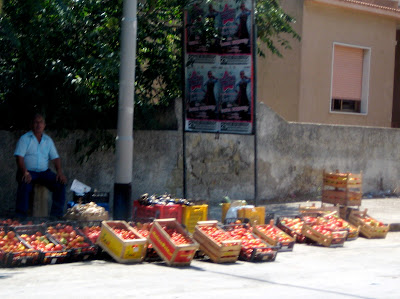 Good tomatoes are not the only necessary ingredients.

Here is what you need:
-Delicious, ripe tomatoes (plum or roma are best)
-Good quality olive oil
-Salt
-Hot, dry weather with plenty of sunshine (August is the time this is done in Italy)
-An absorbent and breathable surface (wood is the traditional surface used)
-Protective cover, i.e. screen, toile or cheesecloth
-Time. Lots of time 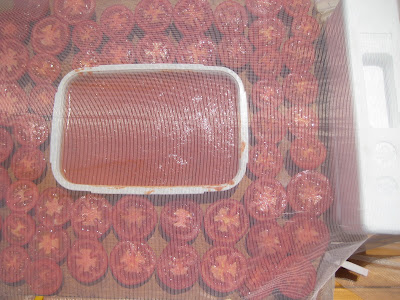 Wash and cut the tomatoes in half, lengthwise and arrange them on a portable surface, like a wood cutting board or a small table. Sprinkle the tomatoes with salt and place them outside in full sunlight. Cover your tomatoes with some type of screen or netting to keep insects and other stuff off your food. For best results, put your tomatoes out in the morning and take them inside in the evening. During the night, humidity rises and can undo some of the drying from the day, and prolonging the moisture can encourage bacteria. I should mention here that if you don’t have a hot, dry climate, don’t try this—it won’t work.

When using small plum or roma tomatoes, you will need anywhere from one to two weeks for them to completely dry. This is where patience comes in. But, it’s a fun process and bringing them in and out each day keeps you up on the progress. 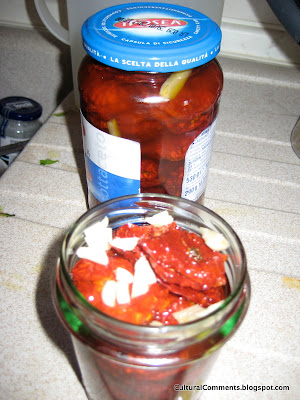 When your tomatoes are finally dry, they are ready to be jarred. This is where they will take the unmistakable flavor you know. You could taste them at this point, like I did out of curiosity, but I don’t recommend it. They are hard, sour and just kinda yucky. Lay the shriveled tomatoes one on top of the other in a jar. Pack them in well, top with a clove or two of garlic and a few basil leaves if you have it. Then you fill the jar with extra virgin olive oil, seal it up and store it in a cool dark place for at least a month.

When your tomatoes are sufficiently marinated, they are ready to eat!