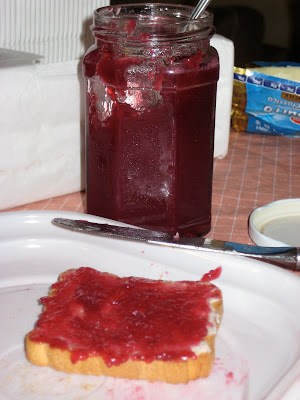 When you live with family in Sicily, most of your relatives will have some sort of fruit tree, vegetable or herb growing in their garden. The other day, we went to the house in campagna of Leo’s Aunt and Uncle, where we picked the last remaining Mulberries of the season. It was a new discovery for me as I had never had them before, nor had I ever seen them before. But there I was, dressed in black and wearing surgical gloves to pick this super staining, incredibly juicy, dark purple fruit.
It all started with a trip to Punto Gelato (my favorite gelato stand with the best, freshest flavors), where, in my ice cream fueled curiosity, I read Gelso listed under the fruit flavors and I asked Leo what it was. He had no idea either--which sparked his curiosity. Noticing the granita machines spinning icy fruit slushies, he sees this dark, rich purple colored one with the sign calling it Granita di Gelsi. He asked his childhood friend behind the counter what gelso was and I see this surprised look on the man’s face. “Come....non ti ricordi i cevusi? (how can you not remember mulberries?)” He recounts how he and Leo used to spend the afternoon up the tree behind the arcade eating the cevusi till they were covered in purple. But it was the word, cevusi, that brought it all back--not gelsi in Italian, but cevusi in dialect. I tasted the granita...but I couldn’t place it. He tried to explain that it was like a blackberry, but it grows on a tree. I still couldn’t place it. Finally, when we got home, I looked it up in the dictionary, and there it was: mulberry. From that night on, Leo could not stop talking about i cevusi and how it was his favorite fruit as a child.

My grand master plan was to pick this fruit to make a clafoutis, Leo’s favorite dish for breakfast. But after several attempts, the final blow came when I turned my oven on to preheat and it blew the fuse for the whole house! Apparently, our oven consumes more electricity than the breaker allows. Even though I was offered to use the large toaster oven that Leo’s mom uses to make most of our meals, I couldn’t imagine cooking a cake in a toaster oven for an hour.
So what to do with all these ripe, juicy berries? I thought about a commercial I had recently seen for packets of pectin to make quick and easy jelly. Hmm...mulberry jam...that would be delightful. The next thing I know, I’m standing over a bubbling pot of molten mulberries; stirring constantly. I turn off the flame, check the consistency, add a little lemon juice and bring to a boil for a final minute. At this point, I have no idea if I’m doing it right or how it will come out; but I’m following the directions. After carefully ladling the dark purple concoction into jars and closing them tightly, it was all done.
The moment of truth came the next morning at breakfast. I set out the normal routine: fette biscottate (dry, crunchy slices of bread that’s more like a cracker), ACE juice (a blend of orange, carrot and lemon juice that is really yummy), caffe' (espresso), some cookies and a jar of fresh mulberry jam. I gotta say, I was impressed--it was thick, chunky, sweet but not too sweet and sooooo good. SUCCESS!! I made jelly and it came out great.

Later that day, I was given a huge container of very ripe figs from an aunt’s tree across the street. “Nicole, these figs won’t last long, do you want to make fig jam?” What a silly question! Of course I want to make fig jam. That might be even better than mulberry jam. So there I am, again, standing over a bubbling pot of molten figs, stirring constantly. But this time I have more confidence and I know it will come out good.
The lasting effect of this escapade is that now I have become the official jelly maker. Not only do I think about the fruits available next season that I can make into jelly, but word has spread and now relatives are bringing containers of fruit to the house in case I want to make more! In autumn there will be apples, pears, oranges...oh, the possibilities...