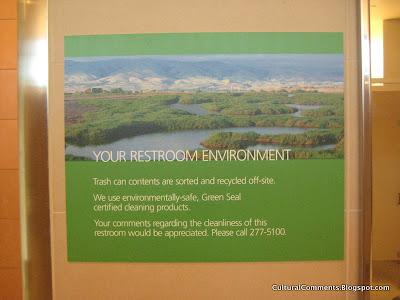 It’s April 23rd, 2002, and almost noon as the train pulls into La Spezia Centrale train station. I have been in one spot since I left Marseille at 5am. My friends and I have about a half hour until our train leaves for the Cinque Terre and I have to pee. But, not just have to…REALLY have to. Ugh, a train station…not my first choice of locations, but you can’t be picky when you’re traveling, right? With trepidation, I follow the signs to the restroom. Low and behold, I walk into a brand new, sparkling train station bathroom with new tile walls, white marble counters and everything is clean. How fantastic! Who would have guessed? I am filled with relief and confidently approach an empty stall-- but I am stopped dead in my tracks. Inside this sparkling new restroom with the top of the line everything, is a new, shiny and sparkling porcelain foot grate. What? I couldn’t believe my eyes—a three-foot square, porcelain squat pad, complete with grated foot holders and a spiffy drain in the center. I did not know that companies made top of line porcelain squatting pads.

My first reaction, after astonishment, was disbelief and then refusal. I turned to leave, but the pain in my bladder was too much to bear and I told myself, 'Nicole, if you want to travel, you have to get used to this shit'. Obviously, if they built an entire bathroom this way, there are plenty of women that can do this. So I gave it a shot. I am not a squatter, nor do I have the necessary thigh muscles to execute that kind of maneuver properly. I don’t know how you are supposed to do it, especially with jeans on. Needlesss to say, it didn’t go so well. But seriously, who’s bright idea was it to make such a beautiful new restroom and not opt for toilets!?

Public restrooms are not something pretty to talk about, nor are they often pretty to look at. But one thing that has bothered me about Italy since that train stop in 2002, is the state of Italian public restrooms. It's really despicable. So why do I write about this now? Well, I am on my way back to Italy today and when you travel, you encounter all kinds of public restrooms. It is the contrast between the great ones and the awful ones that really emphasizes the difference.

I recently flew to San Jose, CA and when I walked off the plane into the gleaming new terminal, I stopped into the restroom to freshen up. Wow, it was beautiful! But what made me stop and pull out my camera was the immediate flahbacks of Italian airport restrooms. As beautiful and gleaming as this restroom was, it was the memory of all the bad bathrooms in Milano Malpensa, Roma Fiumincino, Pisa Leonardo da Vinci, etc. that made me decide to finally write this. 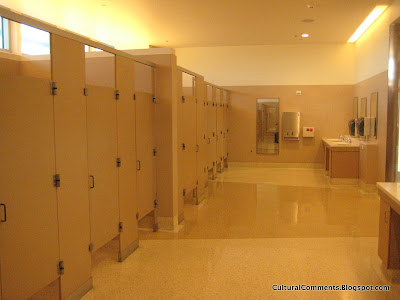 Europe, in general, has pretty good standards for public restrooms, some of them are even the nicest I have ever seen. Norway and England are definitely tops in the public restroom arena. My first experience with a European public restroom was in London at age 13. It was amazing. It was clean, lovely and the best part was the stall itself--the walls and the door went all the way down to the floor and it closed flush against the side, without that awful gap that is all too common in the States. Now, I am a modest person, so that gap between the doors always bothered me. If I could see the people on the outside walking by, then they could see me. And how many of you have experienced some little kid peeking his head under the door, or even crawling underneath the 2-3 foot space along the bottom? Terrible. So England restrooms opened my eyes to civility and how a proper restroom should be.

Traveling in Italy (especially by car), is the worst for someone that suffers from bad restrooms because you are at the mercy of what train stations and roadside services offer. On a cross-country drive to Sicily, the Autogrill outside of Rome was no exception for me. I entered to find a series of seat-less steel bowls perched over a massive open drain with only a cattle grate between myself and the open sewer. Everything that came out from the line of “toilets” along the wall was openly rushing below my feet. Really? All I could think was “I AM NOT AN ANIMAL!” And one time, after a lovely lunch with my cousin at a café across from the RAI TV studios in Palermo, I saw a scene that no person should ever have to see. I have never described it to anyone before, nor will I impose it on you now. But just know that it should have had police tape in place of a door. Seriously.

My sister recently traveled to Spain for a road trip through the Pyrenees Mountains, visiting several small villages along their drive. She loved it. When describing her trip to me, she said everything was beautiful, but the most details she gave were about the bathrooms! The public restrooms left the biggest impression on her. She said that everywhere they went, the bathrooms were clean and beautiful and they provided antibacterial gel in the stalls and lovely scented soap. And it's not just her--I have heard from lots of people how great a place was because their bathrooms were great. For a topic that we don’t discuss, or even consider taboo, there is something about discovering a beautiful bathroom that makes us want to shout from the rooftops!

In Sicily, the Spanish are considered dirty. I have heard so many Sicilians casually mention how dirty the Spanish are (of which none have actually been to Spain or known any Spaniards). But this is most likely a saying passed down through the generations from when Sicily was ruled by the Spanish hundreds of years ago. That's the way it goes in Sicily. I have traveled a fair amount through Spain, and “dirty” was never a word that came to my mind. On the contrary, I have been more scandalizzata, or appalled, at the level of trash, dirt and complete lack of regard for the environment in Sicily.

Anyway, to hear about the clean, beautiful restrooms in Spain really irritated my sense of justice. It got me thinking: what the hell is wrong with Italy and their public restrooms? What I don’t understand is that Italians themselves are very clean and their own homes and bathrooms are always immaculate. But something happens when property becomes communal. Maybe it is because a public restroom is not “theirs” so it is not their problem? Or in the case of businesses they spend all their budget on everything else so there is nothing left for a toilet seat? Who knows? I am certainly open to suggestions.

But for now, I am in O'Hare airport in Chicago, and I just discovered a self-disinfecting toilet seat cover. Pretty snazzy... 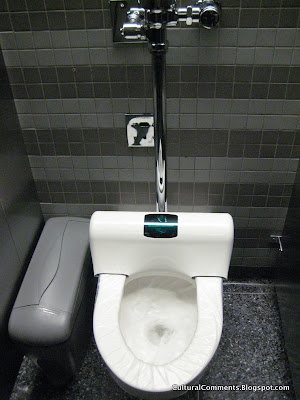 Since my next stop is Rome, I bid farewell to the niceties of American public restrooms, only to return to the dread I feel before opening door #1, door #2, door #3... in the hopes of finding the trifecta of no mess, functioning toilet and a door that locks.