I have to say how very impressed I am with Norwegian people. Their culture, their mentality, and their hyper state of logic is so refreshing. On the outside, Norwegians can seem a bit curt and maybe not quite warm (and they will be the first to tell you about that). But when you talk with someone, or know them personally, they are the most honest, warm, caring, jovial and straightforward people I have ever known. Time after time, from strangers in grocery stores, to paramedics, Norwegians prove themselves to be stand-up, caring people. When you make a friendship, you are brought in and the honesty and openness of their lives, feelings and life events just blows me away.

Norwegians have no need to show a façade or be passive-aggressive. They tell you what they think and what is on their mind, and you always know where you stand with them. They may seem abrupt or even rude by American standards, but it is fantastic! There is no subtext, no treachery, no hiding behind lame stories or excuses. They are honest, man! And when you are injured and in need of help, they are caring, supportive, and light-hearted all at the same time.


Norway is also the epitome of an egalitarian society. Not only are blue and white-collar workers on the same level, but gender equality is practically a non-issue. I have not seen any culture that has men and women on such a level playing field as I have in Norway. When you go out about town, there are just as many men carrying babies and pushing strollers as women. In commercials, the men are the ones cooking dinner for the family or vacuuming the floors. Even the government gives both parents a paid year off after the birth of a child. Women are heads of companies, presidents of labor unions, plumbers, snow plow operators and anything else you would consider to be a “man’s world”. Men are “stay at home moms”, nurses, maids, interior designers, bakers and anything else you would consider a “women’s place”. It is so refreshing, especially after a year in Sicily! Many may point out that in America, anyone can do anything they want—which is somewhat true. But don’t tell me that there wouldn’t be a bunch of comments and conversation about the above-mentioned roles--because there would be. But in Norway, a job is a job is a job. Although, plenty of Norwegians joke that there is gender inequality—they say: “women have way more power than men!” --and then everyone laughs.

The government takes gender equality very seriously in Norway. In fact, in an informational booklet on Norway, they write that even though Norway was the first nation to give women the right to vote, elect a woman as prime minister (1981) and is on the forefront of gender equality in the world, they still don’t consider Norway to be gender equal. The booklet states: “Still, the goal of total equality remains a long way off: while forty percent of the representatives in Parliament are female, only one in every ten company directors are women”. Yeah, those are really terrible numbers.

Let’s shine the light on Italy for a moment, shall we? Just yesterday, I was watching one of the random historical blurbs that they show on TV here (Italian television is the root of attention deficit disorder. Networks will put together random montages of seemingly unrelated shows from the past, but just little bites, not the entire program. I still have yet to understand this). RAI Storia (Like Italy’s History Channel, only not nearly as great) was playing a documentary from 1976 called “Questione Feminile” (The Feminist Question), which involved a woman going around and interviewing regular women (all housewives, because at that time only about 5% of women worked) about what they think of having women in politics and why, if women have the right to be in parliament, none had ever been elected. Whoa! Let's recap that: so by 1976, Italy did not have one single elected female representative. Amazing. Ok, back to the program--you should have seen the masses of women out in the squares (by the way, this was Italy's women’s suffrage movement--in 1976). Maybe America's free-loving, bra-burning American women inspired Italian women to fight for some equality? All the women interviewed believed that it would be better to have women in parliament because they would be better represented if someone understood the problems of women. But when they were asked if they ever voted for a woman, none of them could say yes. Hey, politics is a man’s world, right?

Shortly after returning to Italy from Norway, I entered a nearby shopping center and looming above my head was this huge poster: 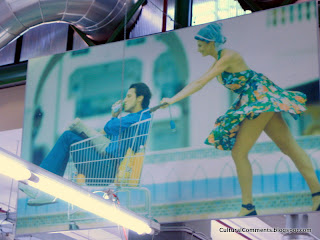 For me, this says so much about Italian culture. First, we have the obvious attraction of the almost exposed rear-end of this woman, because no Italian advertisement can go without almost scandalous exposure. But where it is more revealing is the man chilling out, reading his paper, drinking his juice and not having to even walk because the woman is taking care of it. She is obviously busy making herself more beautiful (the curlers in her hair) but stops everything to push her expectant man around. To see such a large poster looming above a family store reinforces how deeply ingrained women’s servitude to men is in Italy. This is where I would like to compare/contrast with a typical Norwegian ad. Unfortunately, I don’t have an image for this, but it’s a TV ad for Ciff, an all-purpose kitchen cleaner.

The first scene is of a mother playing with her toddler and there are toys everywhere. The next scene cuts to the Dad coming in the door and sees the mom and toddler passed out asleep on the couch. He looks around and the house is a disaster! There are food spills all over the kitchen, finger paint on the table, etc. There is a pause where you think he would look mad (at least that’s what I expect from my own ingrained ideas) but he cracks an amused smile and heads to kitchen, pulls out the Ciff all-purpose cleaner and starts cleaning up the kitchen, being careful and quiet so he doesn’t disturb his sleeping family. It ends with the mom waking up to a sparkling, spotless house and a smiling husband.

What would happen if that ad were to air in Italy? I would love to see the reactions. Many would stare with their mouths open, aghast at such behavior. Many men and women would laugh and say “yeah, right”. Some women would make sure they buy this amazing cleaner in the secret hope that their husband would be inspired to do the same. But would it change anything? It is well known that after we see something enough times, even something shocking, we get used to it and it becomes common place. Just remember that not too many years ago it was considered scandalous to show a married couple going to sleep in the same bed. Could advertising be the simplest road to changing a cultural mentality? I think it is certainly a step in the right direction.

I'm off to buy a bottle of Ciff!