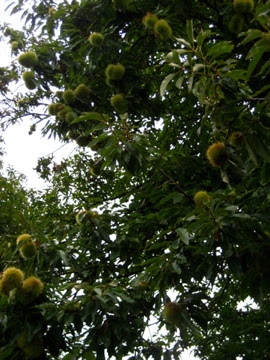 As my last post showed, autumn brings with it some of my favorite foods. In Italy, October starts the season of one my fall favorites—le castagne (chestnuts). So, after another Sunday lunch, bellies full and nothing to do…my husband suggested we go up into the hills above La Spezia and pick some fresh chestnuts. Now, if you have learned from my earlier stories, nothing entices me more than the combination of food and adventure! Plus, I had never seen chestnut trees before--it was a very exciting proposition. 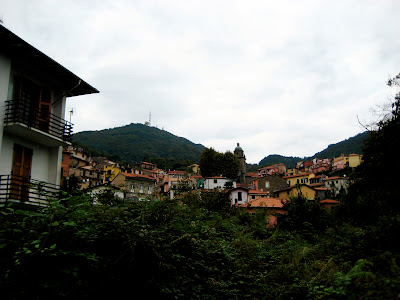 Ten minutes after this splendid suggestion, I was heading to the car, armed with big boots and thick leather gloves. Winding our way through narrow, twisting roads, we slowly rose above the city, leaving concrete buildings and scooters for tall, thick forests and small villages tucked amongst the hills. A canopy of cotton-like chestnut flowers covered the cloudy gray sky and the smell of burning fireplaces filled the air. The smashed remains of chestnut pods littered the road. We had arrived. Abandoning the car on the side of the road, I lept out with my plastic sac, eager to hunt for a few perfect chestnuts. 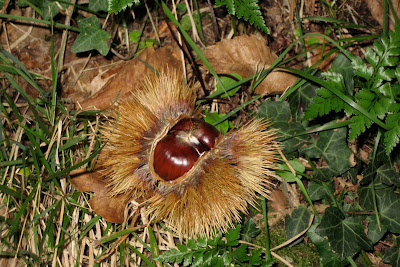 Before my adventure into the forest, here is what I knew about chestnuts: They grow on large trees in extremely spiny bulbs, like sea urchins growing on branches, and you have to break it open to get to the chestnuts. I have heard how sharp and painful it can be to handle these spiny bulbs, so when I used to see $10-15 per pound for Italian chestnuts at the grocery store, I rationalized it. I would think well, it is a lot of work and they get their hands punctured, so I thought it not too exaggerated… 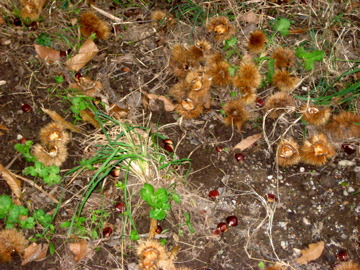 I couldn’t believe my eyes. All of my preconceived notions of the difficulty in getting chestnuts were shattered. There lay, scattered on the ground before my over-sized boots, the biggest display of scattered chestnuts I had ever seen. Of course, I assumed that these were no good, because they had fallen to the ground. Ma non é cosí (It's just not true)! My husband revealed to me that this is how you get them. There is no need to battle with the bulb, because when they are ready, the bulb splits open and when it falls to the ground, the chestnuts pop out and scatter. What an amazing discovery! 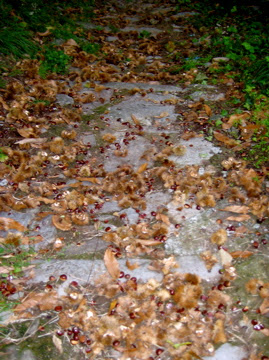 We found a small trail that led deeper into the woods and the ground was covered with beautiful, shiny, brown chestnuts. And all we had to do was bend down and pick them up like a giant chestnut piñata had just been smashed open. Now, you do have to check them for tiny holes where worms may have gotten inside, but thanks to their thick hard shell, they are pretty well protected. We wound up taking home about 5 kilos (over 10 pounds) of chestnuts.


The next step is to eat them! We all sat around the table, picking chestnuts out of the bag, slicing them open to inspect for worms and tossing the good ones into the baking pan. Traditionally, you slice an X onto one side of the shell, but my sister-in-law was adamant about checking them thoroughly. Which was good, because we did find a few vermi (worms). 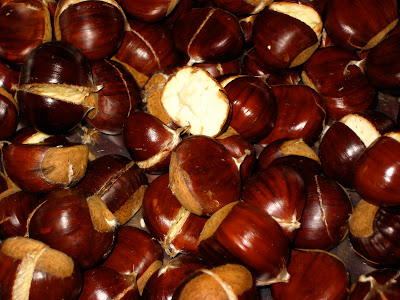 There are several ways to prepare chestnuts, most notably ‘roasted over an open fire’, but my favorite way is how my mother-in-law makes them. Oven roasted with salt and white wine.