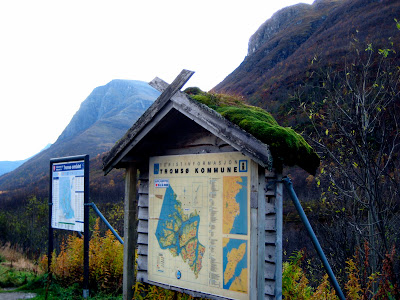 Nothing makes traveling more fun than exploring the area and the adventures it brings. This day’s exploration was a drive south of Tromsø, on mainland Norway (Tromsø is an island).  The adventure was where we were going to find food. We didn’t pack anything to eat, assured that we would come across some small restaurant or local diner for some traditional Norwegian food. Not the brightest of ideas, but I digress...

Anyway, we left Krokelvdalen, where my parents are living and headed south. Oh, we also didn’t have a map, so that adds to the adventure quotient, right? After fifteen minutes along the coast, we take a turn up a small street to explore a neighborhood.  It turned out to be a dead end, but we see the first of many little springs that shoot out from the rocks along the road. Waterfalls were everywhere, from full on waterfalls cascading down from snow-topped peaks to little springs trickling all over the place. 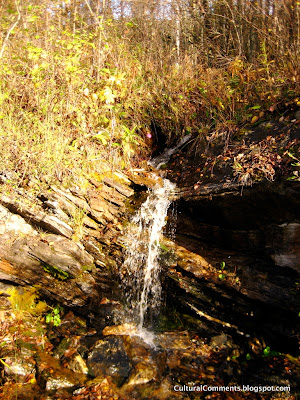 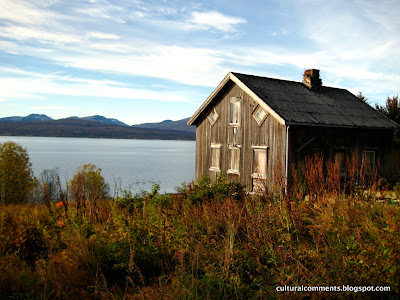 We passed Søndre and headed towards Ramfjord. Turning the corner to another direction and totally different view, we had our first “That’s amazing!” moment.  The scenery completely changed, bringing massive mountains and different terrain. 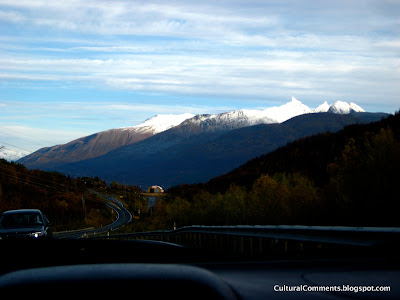 We pulled off to explore a little, driving down until the road dead-ended near the water. I jumped out to take pictures. 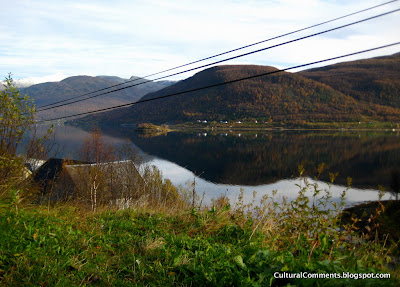 I quickly noticed red clover growing all over the place. Unleashing my inner herbalist and nature woman, I started collecting a small batch of red clover blossoms (which make a great tisane for women). I headed back to the car, but stopped short when I realized we were surrounded by wild bringebær (rasberry) bushes. They were everywhere! So I happily frolicked around picking the last good berries of the season. 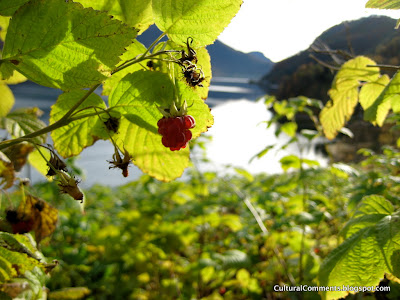 Back on the road. The landscape had changed again. What was round, rolling hills turned quickly into tall, rugged, dark stone mountains. With waterfalls, of course. 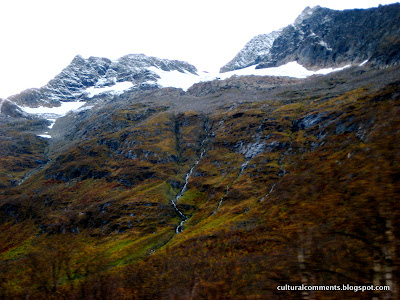 And with another winding turn of the road, another landscape appeared. The fjords were so calm, I was convinced we were driving alongside a lake, not the deep, arctic ocean. The water was so still, it acted like a massive mirror. 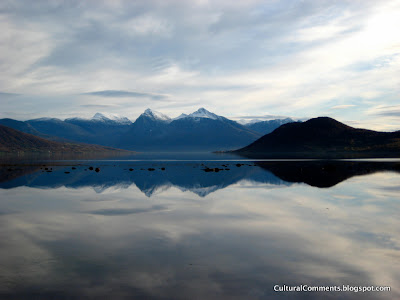 Another shot because it's so AMAZING! 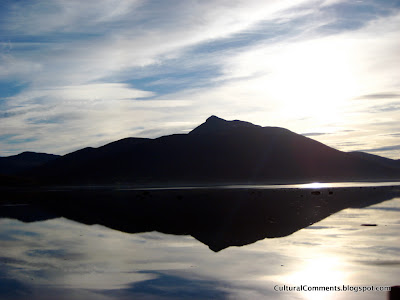 This was about the time we started to get hungry. So our goal switched from following the road wherever it took us, to searching out a community where there might be a little restaurant. Unfortunately, every promising aspect turned out to just be a few random homes. But these people had to get food somewhere, right? The lone hunter we passed with a big hunting rifle couldn't be the main supply of food for these people. There must be at least a grocery store... 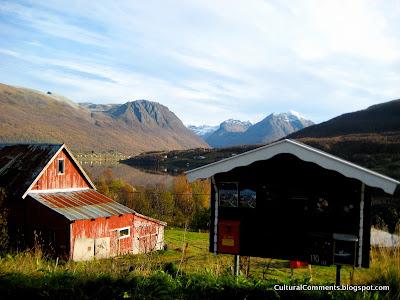 We turn off the main highway, heading towards a more promising town. Changing roads meant we changed direction, and changing direction meant we changed scenery. Before us appeared mountain peaks of jet black, highlighted by further peaks covered in bright white snow. Unfortunately, this picture doesn't even do it justice. It was AMAZING!! 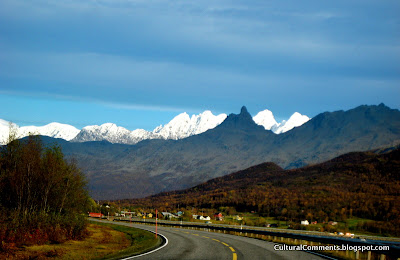 There is a curve in that road...are you curious where it lead to? 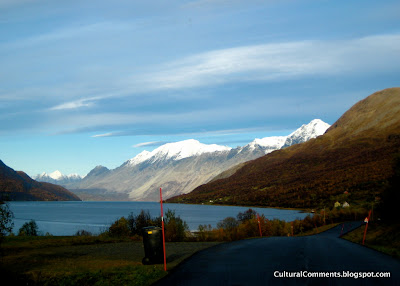 More, yet different, snow capped mountains. At this point in the drive, mutiny started to break out. My mom and I were fully confident that following this road would lead us to food. But my Step-dad was not in agreement. He was fully confident that this road would lead us further and further away from food prospects. We started debating whether to push on or turn home. So what happened? 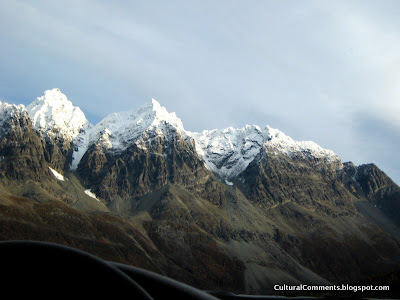 They say that with age, comes wisdom, and he's a pretty intelligent guy to begin with. He knows his wife is always right. So we followed the road around another turn, and with it brought the new scenery, the oohs and the ahhs, and with hunger inspired delirium, he started naming the mountains. These he named "Macaroon Mountains" because they look like coconut macaroons. It was time to find him some food. 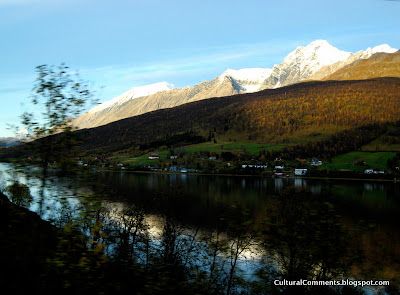 This lovely little town, Lakselvbukt, did have a restaurant--but it was closed. So we pushed on and found a small grocery store where they packed more stuff into it than any other store I have seen. They had everything! So we bought Wäsa crackers, potetsalat (potato salad), mineralvann (mineral water), Jarlseberg cheese, salami and a whole leg of lamb that was on special. My mom had been wanting to roast a leg of lamb since she got to Norway, but she hadn't seen a whole leg anywhere. So she was really happy. We ate our snacks on the picnic table out front and then started our journey back home. 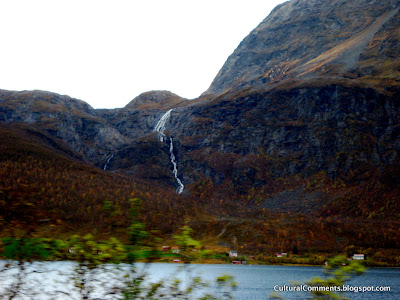 We returned along the same road, appreciating the views that were so astonishing just a short time earlier, but had become familiar. Renewed from his fjord-side replenishment, my Step-dad had one more stop in mind. He noticed something that I had missed on the way up and was determined to find the small road to take me there. With a sudden slam on the brakes and jerk of the wheel, we took a hard right up a tiny road off the highway, drove up a steep dirt road and stopped on a stone bridge. 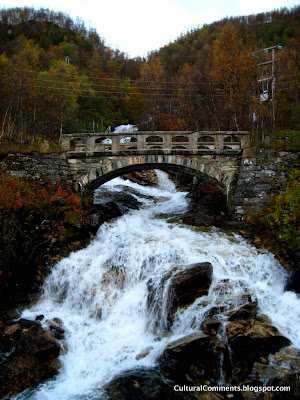 “Wow! That’s amazing!! I have to take a picture of that!” Just when I thought I was done saying that for the day, I was amazed again. The grand finale of waterfalls. 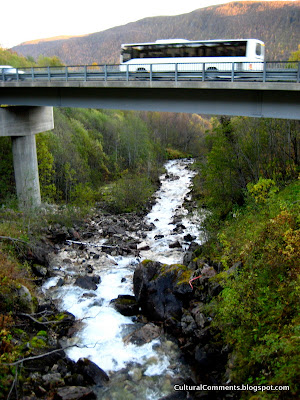 After an entire day of each scene topping the previous one, we were headed home with the beautiful golden hues of the setting sun...and a ten pound leg of lamb in the trunk. As I thought about the beginning of our journey, I was amused at my excitedness over the views when we first started. If only I had known what was to come… As if my future self could travel to the beginning of our trip and say to me: “Silly girl, don’t waste your memory card on these simple surroundings…you are about to see such splendor!” 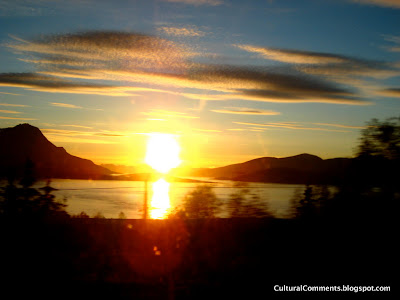 By the time we returned to familiar territory,  the sky had turned a pastel pink, the distant mountain peaks were a soft slate blue and hanging above it all was a huge, celestial half-moon, almost transparent against the pale sky. 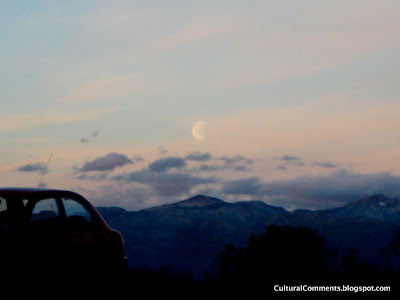