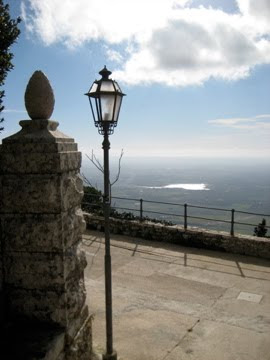 Can somebody say romantic? Towering above Trapani, Erice is this remote, medieval mountaintop village that overlooks most of western Sicily.   With a new Tram to take you from the base of the mountain to the top of this steep, touristic village, it is easier than ever to visit. The tram runs all day, with the last tram around 2am after the pizzerias close.

***Traveler Beware*** Being an in-tact medieval village, all the streets are steep and made with small, slippery stones. Don't make the mistake I did--wear flat shoes, preferably with rubber soles--or you'll spend the whole time barefoot. 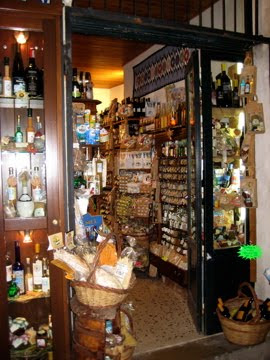 I have been in the summer and the winter, and it is beautiful whenever. But I would recommend going in the summer because there is nothing better than escaping the stifling Sicilian heat with a trip to the always cool and breezy Erice. That high up, they always have a cool wind, which is delightful in the summer and a bit too much in the winter.  It is packed on summer nights and the narrow little streets are filled with cute little shops and tons of people--but they are mostly locals. In fact, it’s rare to see tourists that aren’t Italian...they like to keep this place to themselves. 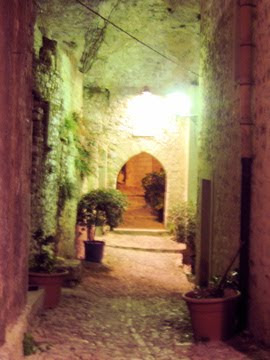 A local celebrity? Maria, the woman who owns and runs one of the oldest bakeries in Erice (except for the one run by nuns) has been featured in American magazines, done cooking shows in New York and has a cookbook for her famous sweets. What do I think? If there is one thing you do in Sicily, make it a stop to this bakery for her always fresh, always hot "Genoveses"--you will never forget it. And when I say, always fresh, always hot, it’s true! Even when the lines are spilling out into the street at 11pm, her kitchen is still bringing out trays filled these freshly made, custard filled pillows. Mmm...can I have one now? 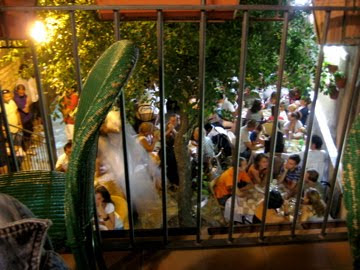 When Sicilians go out for dinner, they go out for pizza, and Erice has no shortage of pizzerias. But the place I like to go is like a secret hideaway, located down an alley, through a tunnel and down a set of stairs. You follow these tiny, obscure arrows on the wall, pointing you to Ulisse Ristorante, but along the way, you think, ‘Where are we going? There can’t be a restaurant down here.’ and then you turn the corner and BAM! There is a beautiful courtyard with trees, tables and lights and it’s packed with people. 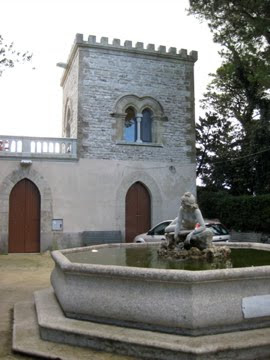 There is an actual castle in Erice, which was originally a temple dedicated to Venus in about the 6th century BC, but later turned into a Norman fortified castle. Today, you'll only find bits and pieces of it.

There is just something special about Erice. Maybe it’s the energy of enduring thousands of years, or maybe there is something mystical from the ancient temple of Venus, but whatever it is, you feel it. And you always have a wonderful time.