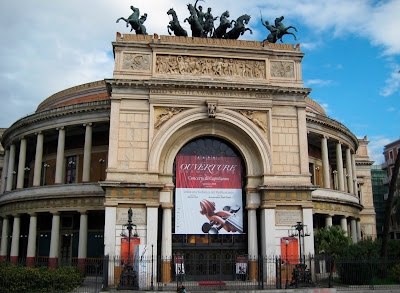 Palermo is the largest city in Sicily, and one of the oldest cities in Europe. These days, Palermo is not on the top lists of most desirable cities to see, but it used to be the hottest destination of ancient times (I mean really ancient). Palermo is still an incredible city though, as long as you can get past the chaos and the grime, it is actually a center for fashion, theater, and dining.
Sicily has a remarkable history of occupation from the Greeks, to the Romans, to the Arabs (who turned the island into it's agricultural splendor of today), to the Normans, the Bourbons and the Spanish. All these cultures have left their own mark, culminating into the unique Sicilian culture. Even the language, Sicilian dialect, is a mix of words rooted to all of these cultures.  It is even possible to see remnants of all these cultures along a one mile strip on "Corso Calatafini". This street includes a Baroque church, like those found all over Sicily, but also a Norman palace, Roman homes and a Phoenician cemetery. Tell me where else in the world you can find that! 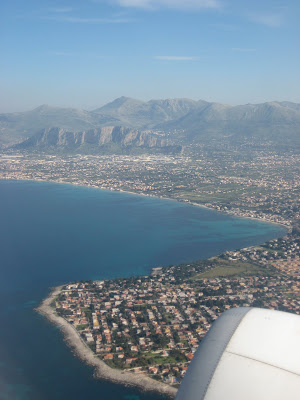 And for the Americans with Sicilian ancestors, the port of Palermo is where they would have set sail for the New World. It was very touching to drive past the port while my great aunt was telling me about the day her father set sail for America to visit my great-grandmother. Now that is retracing your  roots!
At the turn of the 20th century, thousands of families left Sicily for hopes of a better life...and giant food. Yes, giant food. At the time, postcards of recent immigrants holding carrots or some fruit that was bigger than their whole body were being passed around all over Italy!
See? See how great America is? Everything is bigger in America!
And still to this day, we have carried on the tradition of ‘everything is bigger in America’! A great film to see about the exodus from Sicily to America is “Nuovomondo” (New World). It follows a family’s voyage from a small mountain village, where they had never seen fish, nor knew what it was, to the overwhelming city of New York. It won 6 awards at the Venice Film Festival. 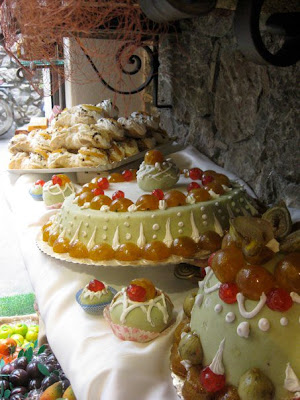 Ok, enough about history, because I could write pages about it. Let's move on to food, shall we? Palermo has many great restaurants, but also lots of great street food, markets and pizzerias. Then there's the pastries! Sicily is known worldwide for their dolci, or sweets. You all know cannoli, but there is so much more: In the winter time, no family meal is complete without a Cassata Siciliana (pictured here, made with a thin layer of cake, sweet ricotta cheese and draped with a light green sheet of marzipan with candied cherries on top) or a platter filled with pasticini (bought by the kilo) which are mini sweets filled with sweet ricotta cheese, like mini cannoli and cassatine (mini cassata, also pictured to the left), rum baba', profiteroles, and spinge (little doughnuts with cinnamon and sugar). In the summer, it's too hot for ricotta desserts, so they switch to ice cream filled desserts.  Instead of a platter of pasticini, they get platters of mini ice cream cones sealed in a light chocolate shell, and when you go to a gelateria (ice cream shop) you get granita (an ice-slushy with fresh fruit flavors), and, of course, gelato. Okay, I could write pages about the desserts too, so I'll stop here. 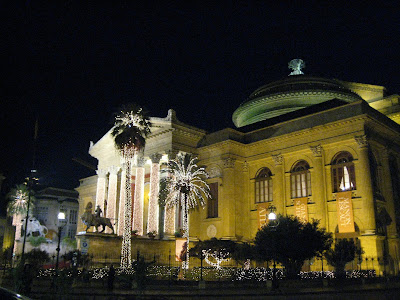 Fabulous shopping is also to be had in Palermo, with lots of streets filled with great stores throughout the city. Via della Liberta’ is the main drag that will take you by all the stores and down to Teatro Massimo, the opera house. Not only is it a functioning opera, but it is home to a yearly haute couture fashion show. The swankiest spot, likened to Piazza di Spagna in Rome, is Via Belmonte. And here you are totally safe to get lost in your shopping because it is closed to traffic. So you have less of a chance of getting killed by all those crazy drivers! (it's insane--the streets are total chaos)
Palermo is an amazing city. It is loud, congested, hectic, delicious, mysterious, ancient, secretive, dangerous, endearing and absolutely gorgeous. Residents love it and hate it, but describe themselves as addicted to it.
Forza Palermo!