This morning, after the shocking results of the UK general election, there was a familiar feeling in the air--a feeling akin to the morning of 4 November, 2004.


Going for coffee on that bright Los Angeles morning, everything felt wrong. The disappointment and despair in the air was palpable. People's usual chipperness was replaced with a mixture of shock and disbelief.

This morning, a decade later and continent apart, it happened again--another surprising win for the conservative party. And again, I saw that same mixture of shock and disbelief on people's faces.

Yesterday, Britons went to the polls to elect the next five years of government--but this wasn't a typical election--it was a historic one.

Described as a 'political tsunami', this election rewrote the political map of the United Kingdom.


The biggest change was in Scotland. Once coloured red for Labour, it turned completely yellow for the SNP.


Led by the feisty and charismatic Nicola Sturgeon, the once obscure Scottish National Party 'roared' onto the scene by winning 56 out of 59 parliamentary seats in Scotland.

Alex Salmond, the previous leader of the SNP said:

"There's going to be a lion roaring tonight, a Scottish lion, and it's going to roar with a voice that no government of whatever political complexion is going to be able to ignore."

But as Nicola Sturgeon 'roared' onto the scene, both the leaders of Labour and the Liberal Democrats made humble exits. By 1pm, Ed Miliband and Nick Clegg had resigned as leaders of their party.

Even Nigel Farage, the outspoken leader of UK Independence Party, lost his seat and resigned as well.
It has been called a "stunning victory" for the Conservatives. They won a full majority in Parliament, something that hasn't happened for the last 23 years.

In the 2010 election, David Cameron wasn't able to get the 326 seat majority needed to govern. He had to form a coalition with another party to make up the seats required enabling him to govern. But this time around, with 331 seats, he now has free reign of Parliament.

So why was everyone so surprised? Opinion polls.

They came in all shapes and sizes... 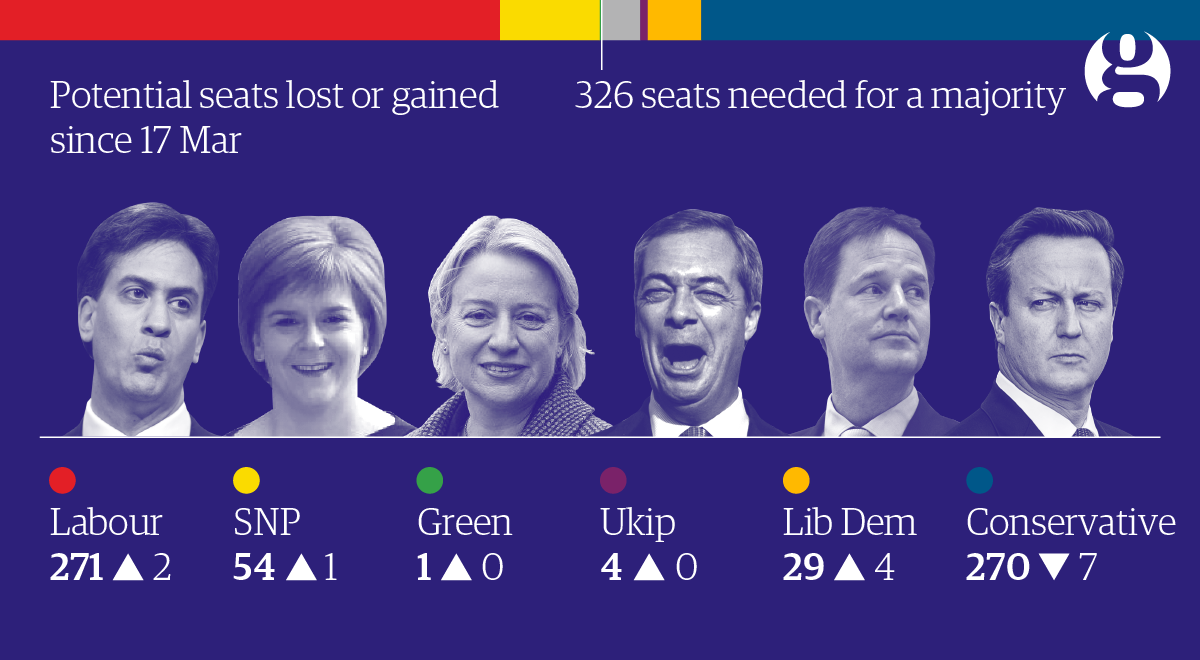 From all different sources...

And all sorts of pie charts... 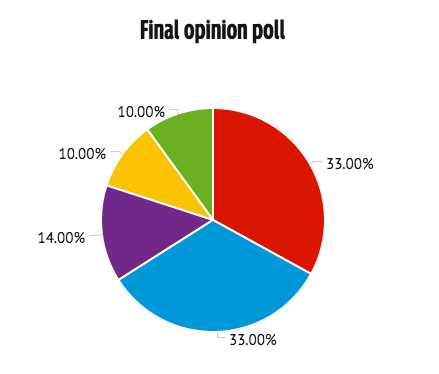 But these polls failed to predict reality.

Election day started out well for me. I came into 'the newsroom' at Sheffield University's Journalism department for the start of a marathon day.

We were scheduled for round-the-clock coverage of the election and were briefed that it was one of the most exciting times to be a journalist. It was said that what we were doing that day would become part of history.

None of us knew how how right that was.

The top story that morning was about polling stations opening and the pride of British citizens exercising their democratic right. We reported the widely used hashtags #GE2015, #ivote and the local #SheffieldStudentsVote.


And in case democracy wasn't enough of an incentive, the university sweetened the pot. Here is my story on bracelets giving students discounts for voting:

There was excitement all around our newsroom, the largest in South Yorkshire. We were buzzing.

When my 'shift' came to an end, a fresh wave of eager young journalists took the helm for a long night of polling coverage and live blogging.

But I wasn't done with my duties just yet...It was my turn to cast my vote and join the selfie movement.


As a resident but not citizen of Britain, I am only allowed to vote for local representation. So no casting my vote for Prime Minister! Nonetheless, I felt privileged to be able to vote in a different country.

As I walked into the local school to cast my vote, I thought how similar it was to voting at home. There was a fold-up table manned by volunteers with a list of approved names. I gave my address and name to a gentleman who crossed me off the list, and told the woman next to him the type of ballot to give me. Then I headed to the temporary cubicle to put an X in the box of my choosing.

I folded the small piece of yellow paper and stuffed it into the black ballot box before heading out the door. Nearly the same process I've done before, only I didn't get my sticker!

After the polls closed at 10pm, the race to count the votes started--and I mean 'race' quite literally.
Sunderland makes it their goal every year to be the first city to declare. They bring in students to literally race the ballot boxes into the count. Below is a video of it.

After the polls closed at 10pm, the race to count the votes started--and I mean 'race' quite literally.
Sunderland makes it their goal every year to be the first city to declare. They bring in students to literally race the ballot boxes into the count. Below is a video of it. 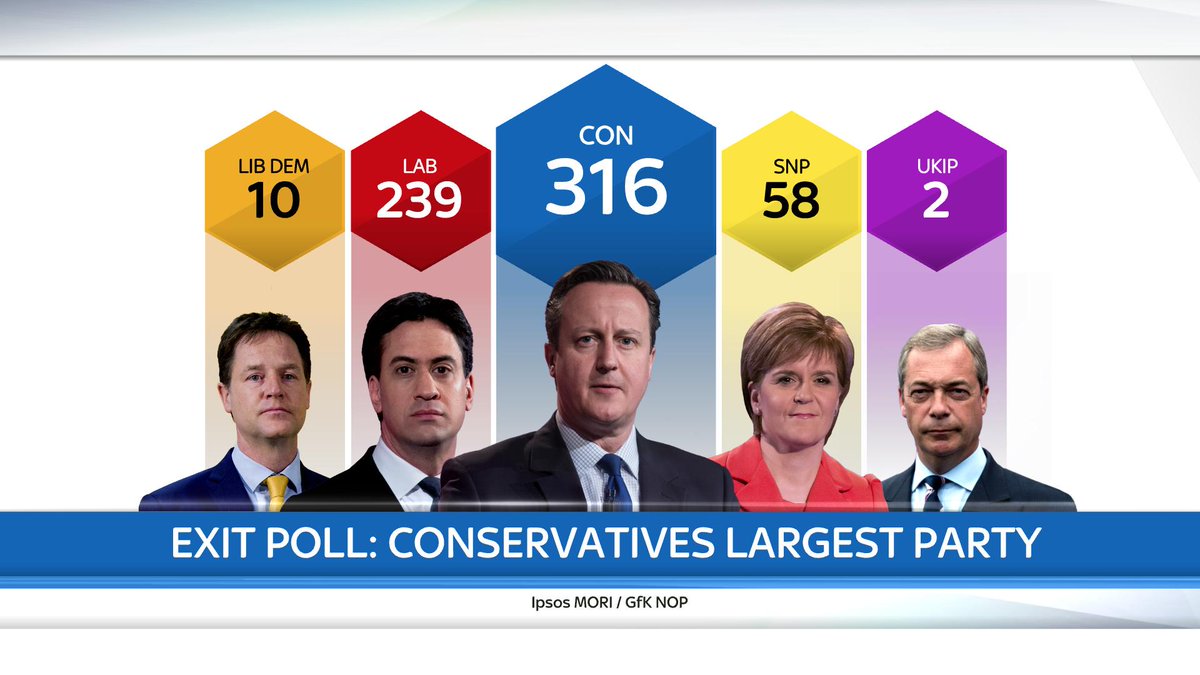 This poll showed a strong Conservative lead, SNP swallowing up all but one Scottish seat from Labour and the Lib Dems losing significantly. But it still predicted the Conservatives short of a majority. And so speculation about possible alliances filled the airways through the night.

In Sheffield, our journalism election team worked all night, live tweeting and blogging from the local polling counts in Doncaster, Rotherham, Sheffield and more. Great job, everyone!


The entire country was surprised with such a different result than previously expected, but compared to the actual, final results--it was a conservative prediction (no pun intended).


This morning in the news room, those who pulled the all night coverage, didn't need to still be there--but nearly everyone stayed.

Through blurry red eyes and disheveled clothing, there was a sense of exhilaration (tarnished by exhaustion) and a sense of duty to see it through to the end.

Election results were still coming in, but by 10:30, we knew Clegg and Miliband would be resigning.
But before either of them had the chance, there was another surprise announcement.


How could anyone leave? It was riveting!


If you would like more details on the days events, see:


In the end, the Conservatives took more seats than predicted, giving them the majority no one expected.


The Liberal Democrats lost 49 seats--something Nick Clegg described as "immeasurably more crushing and unkind than I had ever feared.”

A country that was once mostly red is now a body of blue, with a yellow head (for the Americans, the conservatives use blue here).


One of our profs and longtime journalist, Bill Carmichael, said it was one of the most remarkable elections he has ever seen.

So there you have it. A momentous day, a remarkable day and one that all of us at JUS News will never forget!

And now, in homage to another great person stepping down this year, 'I give you your moment of zen':

Email ThisBlogThis!Share to TwitterShare to FacebookShare to Pinterest
Labels: #GE2015, A day in the life of..., Cultural Comments, European Politics, UK